The 2018 World Handball Championship has finished with today being another fantastic day for the Irish in Minnesota with Limerick’s Martina McMahon winning her first World 4-Wall Open Ladies Title. In doing so she becomes the 1st woman ever to slam both the 1-Wall and the 4-Wall World Championships!!!

The Ladies Senior Singles final was a repeat of the Irish Singles Final that was played last March in which Martina McMahon won by a single ace and that win confirmed her position as Ladies Team Captain for these Worlds. In the opening game today McMahon took an early 8-2 lead as Catriona Casey seem very nervous at the start. McMahon extended her lead to 10-2 but Casey played her way into the game and was only 2 aces down as she trailed 15-17. At this crucial stage McMahon restored her advantage to 20-15 but it took six chance before she got over the line to win the first 21-18.

The second game started in a similar fashion with McMahon again starting well by leading 5-0 but Casey really upped her game and just trailed 4-6 a short time later. There was only ever a couple of aces between both girls until the scores were level at 12 all. The game was at a pivotal point at this stage but McMahon with an ace took the initiative and went 16-12 up. Casey got into serve but did not score. When McMahon returned to the service box for the next few minutes the large crowed witness some of the best serving that has ever been seen in the Ladies game as McMahon with 3 aces and 2 kills closed out the game and the match 21-12 to win her first 40x20 Senior Singles World title.

McMahon followed up her stunning singles win by then teaming up with Antrim’s Aisling Reilly to take the Ladies Open Doubles title this afternoon. McMahon/Reilly defeated Catriona Casey/Aishling O Keeffe 21-5, 21-15 to take the title for the second time.

Earlier in the day Westmeath’s Robbie McCarthy and Clare’s Diarmaid Nash won the Men’s Open Doubles title also for a second time with a two game victory over the American’s Marcos Chavez and Sean Lenning. The first game was hotly contested but the Irish combination dominated most rallies and took the first 21-7. In the second game, McCarthy and Nash stormed to an early lead, which the men from the states were unable to claw back, eventually going down 21-14.

The Juvenile Team Ireland members also had a wonderful world’s with many medals on the way home to Ireland tonight. 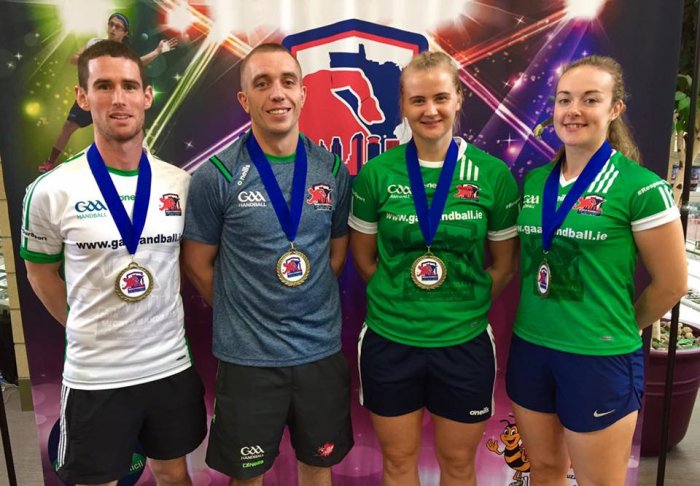