Over the next few weeks, in conjunction with Sport Ireland's #WomenInSportIRE initiative, we will be profiling numerous female coaches, officials & referees in GAA Handball. In today's hot seat is Clare GAA Handball Secretary Paula Carr Whelan.

Tell us a bit about yourself?

I was born and raised near Bunratty, Newmarket on Fergus Co Clare. I’m married to Donal and have 1 son Darragh who turns 18 in August and hopes to start 1st year college in September/October. I work in a loyalty/technology company called Azpiral based in the National Technology park in Limerick, since 2013, prior to that I worked in Anthony Daly’s sports shop in Ennis for 11 years. I have a dog Oscar who loves walks. I follow all things sport but mainly GAA Soccer and Rugby and also love to travel. Dubai and Mexico being my favourite destinations to date abroad, next stop New Zealand when this Covid is all over. We also have a lovely country so at home Galway and Donegal are my favourite spots outside Clare, along with a trip to Croke Park to support Clare when they play there!

When Darragh, my son was about 6 or 7 he played Hurling and he was asked to try Handball by one of the parents. He loves all sports and it all started from there, he loved it. He played up to last year but is currently injured with ACL knee injury and recovering from this his 2nd ACL surgery. I dropped Darragh to the alley and usually stayed around the village as we live about 15 mins away so was easier to stay. That is when I was asked would I become involved in the committee in our Club so I said I would help out in whatever way I could. I became Newmarket on Fergus Handball Club PRO, promoting the Club on social media.

When did you get into the Administration side of Handball and what roles have you undertaken over the years?

My first role was a Club PRO, then the county asked me would I do County PRO. I was in the county role of PRO for 4 years and then 2 years ago the role of Secretary came up and I was asked would I take this on. It is a very busy role with both Juvenile and adult but very rewarding when all things fall into place and you have a structure to the role. I got great assistance from Eoghan Hynes (Chairman) and Tommy Hegarty (Treasurer) and with their help it made the role a lot easier. This year we have a county juvenile secretary also, which is vital with the amount of juveniles playing, Cathal Hannon, so he has lifted the work load a lot for me.

Do you believe there are any barriers to more females getting involved in similar roles? Is there anything you would like to see more of to encourage increased female involvement?

I don’t believe there are any barriers. It’s really a matter of asking them to become involved. People don’t tend to volunteer without being asked so it will not hurt to ask if the role is explained and outlined where they can help out, or let them advise themselves how they may be able to help out also. If someone is good at taking photographs, maybe ask them to attend finals and get some pictures. If they work in finance maybe they could take on Treasure roles. Even supervising in the alley, do up a rota for parents so they will stay on the during training and see the work the coaches are doing and realise they are required to assist them.

I would love to see more female coaches and more young girl’s playing handball. Perhaps a female only coaching course provincially might encourage more mothers or past players to become involved and maybe more club or primary schools promotion of the game to increase the numbers of females playing. The National She’s Ace event is brilliant, perhaps a Provincial She’s Ace event for girls 6 to 12, Primary schools age who are newer or less experienced to the game and have the adult players coaching them for it.

Even though I never played myself, I find the game fascinating to watch, games can go down to the wire. The whole community spirit in the handball community is great, the welcome you get when you go to an alley anywhere in Ireland is fantastic.

How long do you see yourself being involved?

What age is retirement for Handball…. 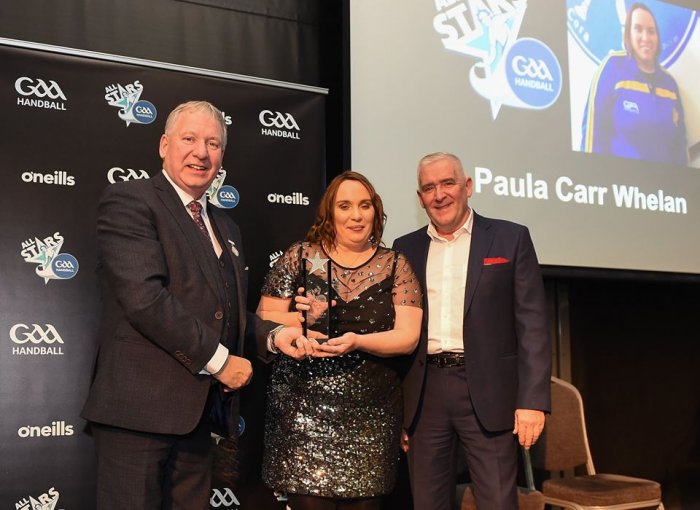