Achill is a misty place. It's one of the first things that strikes visitors to the island, of which I was on last August.

The mist adds to the illusory feel that Achill is shrouded in something: misty history. Mystery, if you'll excuse it. But it's not a grey place - far from it.
At a corner just north of Achill Sound, called Cashel, there stands one of the more colourful sights. Well, it's one of many. One leads to another here.

I am talking, of course, about the ball alley. The one in Achill stands on top of the hill at that northbound slight turn before Lynott's - thought to be the smallest pub in Ireland, which was also paid a visit - and the great, windy beyond.

The alley itself has seen little use in recent years - not for handball anyway - and is in need of repair but the 50-foot outface of it bears a striking mural map of the entire island. You know where you are here - "You are here" it tells you - though you might not know exactly when you are. 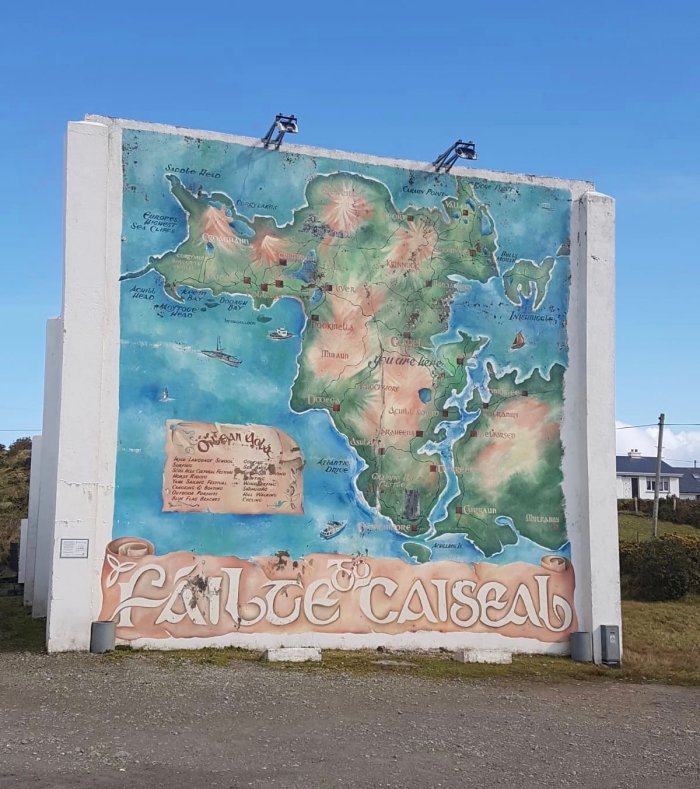 One of the earliest archived mentions of the striking ball alley at Cashel comes from The Mayo News, and the edition of October 21, 1967.
Sandwiched between a story about a new housing scheme and another bearing the alarming headline 'Assault Case Sequel To Poisoning Of Sheepdog' is a short update on the tricky formation of the alley.

"Members of Achill Athletic Club were given a portion of land at Cashel vocational school to build a ball alley in 1964. Now, [three years later] when the project is half completed it is found that there is no access to the alley.

"Mr Sean O'Regan, CEO, told a meeting of Mayo Vocational Educational Committee in Castlebar 'the alley is half built at this stage and unless they come down in a helicopter they cannot get into it'. Mr Pat Conway explained that the width of the alley inside was 30ft and they had only 30ft of ground from the committee.
"'It means that the walls are trespassing on the committee's property,' he said."

The anomaly was eventually solved but the work went on for years, as did the fundraising (a significant £2,750). The opening of the alley itself was put back till August, 1971.

Reporter Martin Curry was given to report on what was 'an event of great significance' under the headline 'Monument To Courage And Enthusiasm'.

"The erection of a handball alley may not generally be looked upon as an event of great significance in a district but the new handball alley, which was blessed and officially opened at Cashel on Achill Island on Friday evening last, is somewhat out of the ordinary.

"It is the first handball alley to be erected on the island and has been provided not as is in most other cases to cater for existing followers of the game but rather to create facilities whereby the game can acquire new followers," he wrote.

If one man was responsible for the alley, and he refused honour, it is Fr Richie Horan, himself a prominent handballer and former chair of Connacht Handball Council.
Fr Horan was an influential figure and is fondly remembered by islanders today.

He was also, incredibly, a magician and member of The Magic Circle. A few months before the opening of the alley, he appeared on RTÉ's 'Newsbeat' show, performing a trick on Purteen Pier, where he balances his hypnotised niece on the edges of three large swords, then two and finally one.

"It's not Black Magic, it's a trick," Fr Richie tells reporter Cathal Ó Shannon, just in case. The spectacle is available on RTÉ's website and is indeed magical.
Come the late summer of '71, Fr Horan says mass before a busy congregation - gathered inside and above the alley - in Irish, to celebrate the opening, before himself serving the ball to Mayo Handball Chairman Jack O'Donnell.

If handball would later migrate indoors, Fr Horan was then looking to the here and now - the name of his game was to first grow the sport.
"Not unlike any other rural area, prior to the provision of this alley, the only place young boys could engage in handball was the gable end of a house and to provide a new alley where there was no actual tradition for the game took courage and would not have been possible but for the enthusiastic support given to the project," he said.
Unfortunately, as far as I know, All-Ireland honours never went to the island and the alley has now grown quiet and still.

The cracked court's main company today seems to be parked up older school buses, passing tourists and, encouragingly, those who voluntarily tend to what they can.
In May 2016, unsurprisingly, as things tend to go, the alley was the location of a theft, when both spotlights (valued at €125 each) illuminating the mural were stolen.

"The mural of the island was organised almost ten years ago by local community group Grúpa na Mna Caiseal and designed and drawn by Claremorris artist Karen Forde," the crime report unusually detailed.

An unnamed local was quoted, hinting at the place the alley still inhabits in locals' hearts:

"The mural is a focal point of the community and it is disappointing to see it in darkness at night."

Some time after, the spotlights were replaced, as the locals acted and the map of Achill is again, comfortingly, lit up after dark.
Half a century has passed since Martin Curry presciently wrote that the Keel Pipe band paraded at the opening of an alley that would "undoubtedly become a local landmark" - a high bar here.

As they have done for the longest time, Keel Pipe band paraded for St Patrick's Day again last year, although not in 2020 due to the ongoing Covid-19 shutdown. They, like the alley, are still standing, though - no doubt, most different landmarks, but both adding light and colour to the island's many mists.

But while the waves still crash on the cliffs, sadly, the rubber no longer thwocks against the concrete in Cashel. And, foolishly, when I visited, I didn't even bring a ball with me to set that right.