All roads lead to the famous Castlebridge club in Co Wexford this Saturday for a mouthwatering triple-header of ‘big alley’ doubles play.

First up, local favourites Gavin Buggy and Galen Riordan meet Kerry lefty Dominic Lynch and his partner Jack O’Shea. The final game on the bill is a repeat of the 2018 Senior Doubles final between Meath (Gary McConnell and Brian Carroll) and Dublin (Eoin Kennedy and Carl Browne), which the Royals won on that occasion in a 21-19 third game.

A large crowd is expected to descend on the venue, which has hosted many top-class matches over the years. The Wexford men will be hoping that home advantage counts in the first game while the second pits very familiar and experienced foes against each other.

The ladies decider, meanwhile, sees the queens of the doubles game, Catriona Casey and Aisling O’Keeffe of Cork, against the new-look Kildare combination of Mollie Dagg and Pauline Gallagher.

The Rebels have won the last seven renewals of the Senior Softball Doubles, a run dating back to their first title in 2013 which was abruptly halted by the pandemic, with no doubles championships in the last two seasons.

Casey’s rivalry with Limerick’s Martina McMahon for the title of best ladies player in the world has been well documented and has gripped handball fans for the last half dozen years. Casey won the Senior Singles in the small court earlier in the year but the Limerick lefty came back to defeat her in the softball decider recently.

So, Catriona will be looking to make amends and motivation will certainly not be a problem, not that it ever really is for the brilliant Ballydesmond star. However, doubles is a team effort and O’Keeffe’s role should not be under-estimated.

Aisling is a fine singles player in her own right, beating Sligo’s Laura Finn to make the last four of the singles race this year, and her steady right-sided play has been key to Cork’s success over the years.

The Cork women defeated McMahon and partner Aisling Shanahan 21-12, 21-13 in the doubles semi-final and naturally come into this decider as firm favourites.

However, the Kildare pair will enter the game with a fully-warranted degree of confidence too. Pauline Gallagher, formerly of the Swinford club in Mayo and relocated to Kildare, is a terrific 60x30 player who has two Senior Doubles titles to her name, won in tandem with Amy Corrigan in 2011 and 2012, just before the Cork run started.

Pauline’s partner, Mollie Dagg, is regarded as one of the brightest up and coming talents. She won All-Ireland honours in Intermediate Singles (2019) and Minor Doubles (with Leah Doyle in 2018) in the 4-wall code but she is equally adept in the larger court and the novel pairing should be quite formidable.

An exciting final is expected and much will come down to how the Lilywhites can deal with Casey’s ability to finish rallies and her awesome retrieving. While Cork are fancied to get over the line, this match has the potential to be very close and should provide a great spectacle and another attractive advertisement for female handball, which is very much on the up at present. 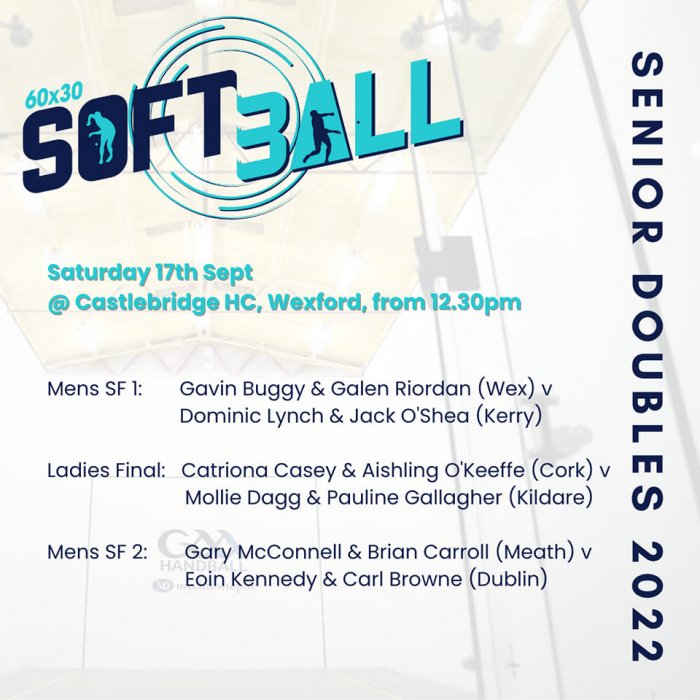