With 11 All-Ireland Senior Softball final appearances behind him and seven titles in the bag, Robbie McCarthy is not getting fazed about another appearance on the big day.

The Westmeath man prefers to let his handball do the talking and, speaking to GAAHandball.ie this week, the Mullingar maestro said that his approach to Saturday’s final will be no different than any other year, regardless of the opponent.

“No, no. It doesn’t matter to me who it is, it’s just another final, that’s it,” stated McCarthy.

“It’s another final and I am just focused on myself, that’s all.”

The disruption earlier in the year came at a time when McCarthy, a soldier based in Athlone, was in flying form in the 40x20 court. He took it in his stride, though, and just got on with things, doing, he says, a little bit of fitness training while handball courts were out of bounds.

“I was really busy with work, even during lockdown, the Defence Forces were doing a lot. It gave me a nice bit of a break. I still did an odd run here and there but I wasn’t in a handball alley obviously and I wasn’t getting to train properly.

“I just did a little bit to tick over, I piled on a heap of weight at one stage and then had to get rid of it when I went back. It was a new thing for me this year I suppose.

“I just kept plugging away. It wasn’t that I missed it or that I didn’t miss it. I got to spend more time at home.

In previous years, much of the pre-championship talk centred on McCarthy and Eoin Kennedy. With the Dubliner having opted out of this campaign, McCarthy has been the name on everyone’s lips. Has that added pressure?

“I haven’t even thought about it. There’s no pressure on me, I’m 33 now at the end of the day. I think the pressure is kind of wearing off me and going more towards the younger boys. No pressure at all,” he said.

McCarthy had a hugely-impressive win over Meath’s Gary McConnell last time out but he’s not getting carried away.

“I am probably happy with the way I’m moving, I probably haven’t moved this well in a long time. But I was after training with Gary when I just came back after the lockdown. We had very good, very intense games, he was taking a lot of them and there wasn’t much between us at all.

“I don’t think Gary played as well last week as he had been for the couple of months prior.”

The seven-time winner’s mantra won’t change this weekend. Martin Mulkerrins represents a new softball final opponent but McCarthy’s focus is firmly fixed on his own performance.

“I know I’m playing him but I haven’t even thought about what he’s going to do whatsoever. I’m fully focussed like I have been over the last 10, 12 months on myself. I was going really well in the small alley this year and everything was coming together but I just realised there’s no point in even thinking about what they’re going to do. I just worry about what I’m going to do and it seems to be working, it keeps me more focussed on myself.

“If I make a mistake, I’m more annoyed with myself over a mistake than worrying about what they made me do if that makes sense. It’s just a different mentality and it seems to be working, I am enjoying it and that’s it.

“Genuinely I am just tipping away and playing handball, I’m not treating it like a high pressure game any more at all. I am in good shape, I can play at an intense level and I’m happy to compete at this level and that’s just it.” 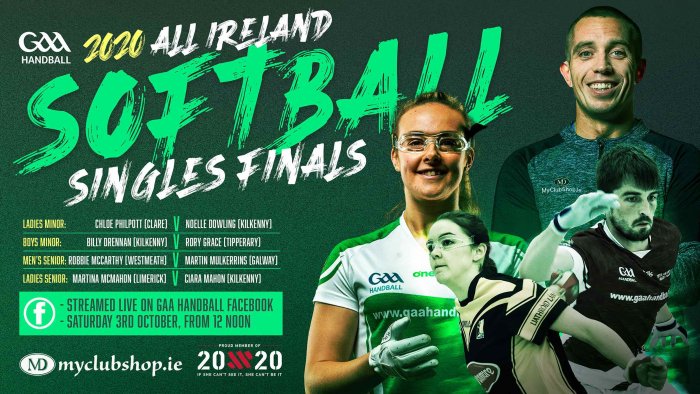