Last week GAA Handball had the pleasure of meeting the family and friends of the late Julie Long at St. Brigids Handball Club in Blanchardstown where they presented the new Julie Long Cup for the 4-Wall Ladies Minor Singles winner. This cup will be contested for the first time in Kingscourt this Sunday the 5th December with Kilkenny’s Noelle Dowling versus Tyrone’s Mairead Fox.

Julie had many successes within handball and among them were the following:

She was also a finalist in the Women’s B Doubles at the 2000 World Championships. Apart from her playing career, Julie took a great interest in coaching juveniles in her club St. Brigid’s in Blanchardstown.

We are delighted as Julie’s friends and family that the Julie Long Cup will be launching on the 5th of December. Julie was an amazing presence in handball for many years and should have continued to be for many more. We held a fun informal memorial tournament in Julies honor every year for 10 years which was widely supported by the handball community however given her talent, attitude, and the impact that Julie had on the women’s game, it wasn’t enough to represent her in full.

Marguerite Gore suggested naming the Ladies Minor Cup after Julie. GAA Handball were very supportive of this and helped us moved forward with planning. The cup was donated by us, Julie’s family, and Dublin Handball who were eager to support given Julie’s heritage.

It would be an injustice not to remember our great coach Shay O’Reilly, who nurtured so much talent in handball and was an absolute Gent. He recognized Julie’s talent from an early age and ensure that she realized her true potential. This is very special for Julie’s parents, her two sisters Vanessa and Antoinette and her two daughters Sophie and Amy. Julie’s memory will be retained in handball through presenting the cup to the emerging talent of Ladies Handball. We know that the standard of handball will be representative of the skills that Julie had but we also hope the ladies compete as tough competitors with the fun, positive and cheeky attitude that Julie always had.

‘Julie Long is someone I will always remember when I think back on my juvenile handball career. She was a fierce competitor who was naturally gifted and glided around the court with ease. Her side arm, left and right was always something to admire. We had some great matches in our early years and she is someone I always admired on the court. I have very fond memories from our playing years, however, what I will remember most is when I met Julie in Kingscourt after several years being away from the courts and found out that she was in the toughest battle of her life off the court. I spoke to her for some time and she told me what she was going through. The way she dealt with her illness and faced it the way she did was courageous and showed how strong she was. Not only was she a fighter on the court but she was the toughest/strongest person I’ve known, knowing what she was going through. Through it all I mostly remember her smile. It would light up a room and that’s how I remember her to this day. Fierce, strong, skilful and always with a smile’

‘I grew up watching and playing against Julie Long and I was totally mesmerised by her incredible talent. She had it all, underarm, overhand, side arm, she could kill from anywhere in the court and she took the ball beautifully off the back wall both left and right. Julie was in my opinion even to this day, the most stylish handballer, she made handball look attractive. She had amazing footwork and as a result could use both hands with such precision to guide the ball to go where she wanted it to go in the court.

Julie was a phenomenal handballer and she along with Sibeal McKenna changed ladies handball forever as both these ladies were incredibly talented handballers and beautiful to watch.

Off the court Julie was my friend. We spent a lot of time together training for US Open's/World Championships and she was a very funny girl and certainly had a devilish laugh. She was definitely a rebel, a rule breaker, always up for a laugh and I remember her always talking so fondly about her little sister who she loved dearly and telling me lots of funny stories about her coach Shea O Reilly who we can all agree was such a lovely man and another great in our handball community.

I remember a funny story when Julie and I were in Winnepeg, Canada for the Worlds, we were sat outside and Julie was having a cheeky smoke and this Canadian guy was coming towards us and he said to Julie that did she know that smoking stunts her growth and quick as lightning Julie responded by jumping up from her seat and I am not joking this was guy was a midget in height compared to Julie as she stood up next to him and she burst out laughing, saying 'really' in her thick Dub accent and I literally had tears in my eyes with laughing so much.

Julie was a great handballer and a great loss to our sport. She was someone I always wanted to play against from when I first met her at the age of 9 in Mosney and she really was amazing to watch on the court. I wanted to emulate her skills, her flawless handball strokes and her footwork.

She will always be remembered in our sport as a great talent and a great girl, taken way too young and dearly missed by all. 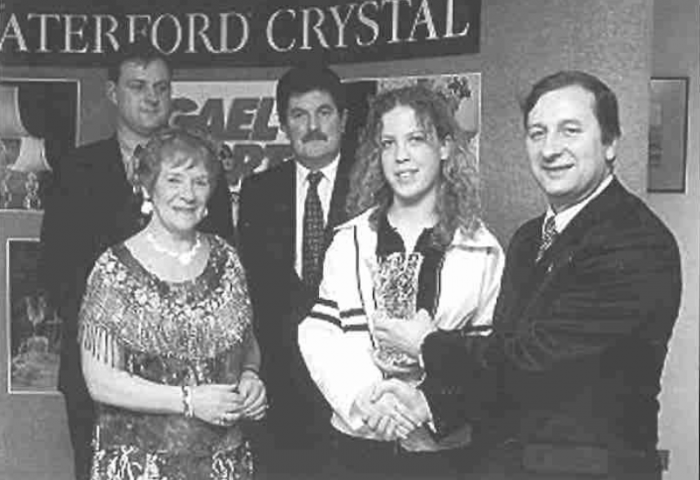