The American Collegiates are over for another year and once again the travelling Irish players blazed a trail through the open grades with the Men’s and Women’s Open singles and doubles falling to Irish players. The sweltering conditions on and off the court did nothing to deter these players who were not to be denied after travelling so far.

In the Men’s Open singles, UL and Clare man Colin Crehan, at his first American Collegiates, fought through two early tiebreakers against Luis Bustos and Max Langmack to advance to the quarter finals where he came up against more familiar opposition in QUB’s Ryan Mullan. Mullan was in flying form, having recently won the Ulster U-21 singles title, and presented Crehan with a stern test. However, Colin was not to be denied, and after surviving a close opening match 21-18, he stormed to win the second game 21-7. His semi-final opponent was another familiar face in UCD’s Galen Riordan. Riordan, last year’s ICHA 40x20 singles runner up and a former USHA Collegiates Men’s Open doubles champion, appeared to be the best positioned to cause an upset against Crehan. However, Crehan maintained total control throughout the game, never letting Galen get a foothold, and closed the game out 21-3, 21-11 to advance to the final. Juan Canales of Lake Forest College stood between Crehan and the trophy. Canales, a talented player who had caused a major upset earlier in the tournament by eliminating no.2 seed Tyler Stoffel, fought through a difficult 2 game semi-final against Missouri State’s Sam Esser. Crehan, keeping a hold of his form from the previous day, shut Canales out of the game and took home the win on a 21-10 21-11 scoreline.

In the Men’s Open Doubles, UL totally dominated with the final pairings both coming from the Limerick college under the watchful eye of their coach, collegiate veteran John “Bosco” Hurley. Colin Crehan teamed up with first year Jason English where, after winning a comfortable quarter final, were up against it in the semi-final against Missouri State’s Esser and Langwood. Finding themselves 9-7 down in a tiebreaker, they required some fantastic shots from English to get the UL team back on track and into the final with an 11-9 win. In the other semi-final, one of the greatest comebacks seen in college handball took place as UL pair Daniel Relihan and Seamus Conneely survived six game points at 10-20 to eventually overcome Anthony Collado and Juan Canales 21-20 in the first game. The UL team, last year’s Men’s Open Doubles winners, looked to have used up their energy as they succumbed to a 15-0 deficit in the second, before rallying with fantastic kills and retrievals to take the second 21-18 and set up an all UL final. Relihan and Conneely were unable to pull off their great escape for the second time as Colin and Jason, in rampant form, pulled off a good win on a scoreline of 21-8 21-15.

In the Women’s Open, Trinity College had a fantastic tournament with their two representatives, Ciara Mahon and Lisa McKenna, bringing back three titles altogether. In the Open singles, Mahon blitzed every opponent in front of her to set up a final with UL player Niamh Dunne. After a tense open game that Mahon took 21-16, she found her feet for the second to close out the match 21-9 and take her first American Colleges title. McKenna lost a close first round match with NUIG’s Shona Ruane which dropped her into the 9-16 bracket, where she advanced to the final to face Lake Forest’s Kyra Vidas. A close match ensued which Lisa managed to take in the tiebreaker winning 21-13, 18-21 and 11-7. In the Women’s Open doubles, it was an all-Irish final as the Trinity girls faced stiff competition from UL’s Niamh Dunne and Natasha Coughlan. However, the Trinity pairing, having lost last year’s final, showed off their determination and experience to take the match 21-8 21-7 and bring the title back to Dublin. 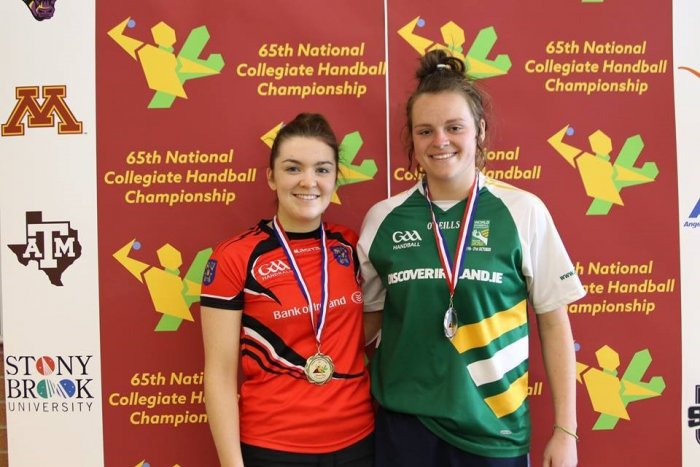 DCU had a great win the A doubles as DCU captain Cian Ó Dálaigh and first year Ben Devlin didn’t drop a game as they stormed to the final for a 21-4 21-17 win. UL’s Fergal Coughlan Jnr and UCD’s Brian Mahon were both unlucky on Sunday morning, losing out in the Men’s A1 division finals. In his maiden voyage to America, NUIG’s Conor Noone was presented with a prestigious Sportsmanship award by the tournament organisers. He then topped off his week by defeating his NUIG teammate Darren Carter in the A2 final. After taking the first game 21-15, Noone fell behind to a spirited comeback from Carter, who took the second 21-18 before suffering an unfortunate injury in the tiebreaker and was forced to concede the match. Meanwhile, UL completed their stellar tournament by taking home the Men’s team championship, an award based on the combined scores of all male players competing for each college, across all divisions.

The week was a great success all round with the 31 players who travelled showing great spirit and passion for handball both on and off the court. The ICHA would like to send our thanks to the USHA who organised the tournament, who were very welcoming and helpful throughout the week. Special thanks also goes to the tournament hosts in Arizona State University for their wonderful hospitality. Finally, we would also like to give our sincerest thanks and appreciation to Fergal Coughlan Snr, who was a fantastic coach throughout the week, running between games and providing advice to players when they needed it most. We thank Fergal for all he did to help players during the tournament. With next year’s competition set for Missouri State University, we look ahead to more great performances and titles coming to Ireland.