Saturday sees the QF action in the 2020 MyClubShop.ie All-Ireland Men’s Softball Championship, and Offaly man David Hope is one player aiming to cause an upset after claiming a good Round of 16 win over Kilkenny’s Shane Dunne last weekend.

That was Hope’s season opener and given that Dunne is a relatively recent winner of the Minor & Intermediate titles, it was a nice tester to see where his game is at.

“The first game I built up a good lead and controlled the game well to see it out. Shane made a real go off it in the second and there really wasn’t much in it but I finished strongly. For the most part I was serving well and that earned me plenty of set ups which I think proved the key difference.”

“My game is in decent shape now and I am injury free so I am looking forward to getting back in the court again this weekend.”

Hope takes on reigning Doubles champion Gary McConnell (Meath), but he will have to defeat the Kells man for the first time in his career if he is to progress to a maiden SF.

“I have played Gary a good bit at Intermediate level without any success. I lost a few tough Leinster Finals to him going back a good few years now, but he has great power and skill so I know what to expect.”

The QF stage may have been the furthest Hope has reached in Championship, but he has performed well in the Softball Nationals, reaching two SF’s in the last few years, and only a marathon tiebreak prevented him making a Final. His attacking left handed game makes him a tricky opponent and he will be confident he has the game to trouble anyone on his day. 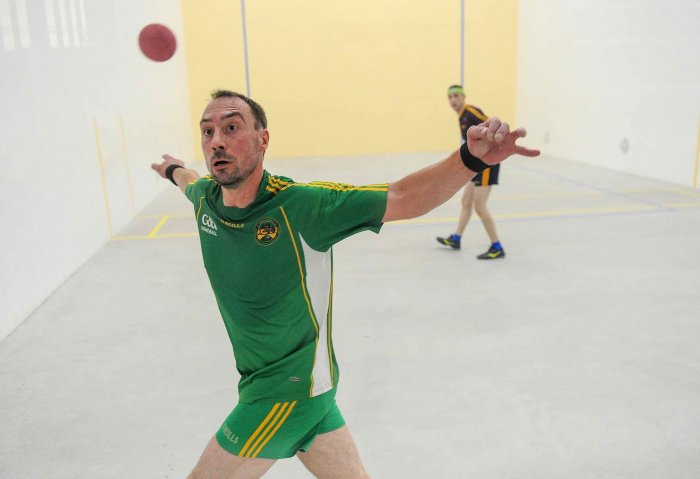 A carpenter by trade, the Fahy’s Cross club man has been enjoying his training of late getting regular games with top seniors, including one of the very best which will clearly stand him well.

“I train a good bit with Robbie (McCarthy) and have done over the years. That is great training to be getting as Robbie as we all know is a class act.”

McCarthy himself takes on Ciaran Neary, whilst in the bottom half Galway’s Mulkerrins brothers Martin & Diarmuid bid to keep their hopes alive of a SF showdown. Second seed Martin faces the crafty Joe McCann from Mayo, whilst Diarmuid has a tough match in Wexford’s Barry Goff.