Most handball disciples may think they know all there is to know about the greatest sport in the world but here are a few facts you may not be aware of and which just might impress your mates!

1: Handball was played on the moon – well, almost

The summer of 1969 must have been a quiet one on the handball scene. On August 1 that year, the Irish Press reported that “the most interesting news for handballers in recent times” was the news that US astronauts heading for the moon were keen handballers.

And – and bear in mind this was written on the first of August, not the first of April – readers were informed that “when the Americans decide to introduce sport to the moon, there is no reason to believe that it will not be handball.”

Jumping the gun a little bit, maybe. By the way, the killer line as the writer moved back into the general run of rounding up the results was quality: “Back in our own earthy courts this week-end there is a comparative lull…”

The full text of the article was as follows...

“The most interesting news for handballers in recent times nas been the confirmation that many of the men involved in recent moon-shots have a dedicated interest in handball.

“Thomas Stafford and John Young of Apollo 10 fame are quite accomplished players and would rank in the top flight of the Big City competitors.

“Michael Collins of the Apollo n historic flight is perhaps the best of the three.

“He is the champion handballer at the Houston Base and makes no secret of the fact that handball is his favourite game.

“His last recreational exercise prior to blast-off was a rigid handballing work-out in the court. As a result of the handball prowess shown by the spacemen those with a serious interest in the game, are not beyond pointing out that when the American’s decide to introduce sport to the moon, there is no reason to believe that it will not be handball.

2: But it WAS actually played, widely, in South Africa...

It may come as a surprise to younger readers - or maybe even older readers - to learn that, a few decades ago, South Africa was a handball hotbed and was regarded as one of the strongest handballing nations in the world.

At one stage there were seven handball clubs in South Africa, where the game had been introduced by Irish priests and Christian Brothers and a GAA-crazy Irish family.

According to a report in The Irish Press on July 16, 1971, the game was first introduced to the country in the early 1930s. A prominent Irish family in Johannesburg, the Muldoons, sent their son Brendan to be educated at Knockbeg College in Carlow where, astonishingly, he was reputed to have introduced hurling.

When Brendan returned to South Africa, he brought handball with him, and a tradition was born and in 1935 an alley was built at the Village Main Native Mission.

The Oblate Fathers, who co-operated in the construction of the alley, showed an intense interest in the game and competed in the championships, the final of which were played on St Patrick’s Day.

From 1935 to 1950, the ball-court at Village-Main was the happy meeting place for Irish immigrants and was the scene of some terrific duels.

Clubs were formed in Johannesburg, Germiston, Boksburg, Benons, Brakpar and Florida and leagues and championships were soon flourishing.

Writing, again in the Irish Press, in 1964, Sean Clerkin reported that the best South African juveniles were on a par with those in Ireland.

“Youth,” he said, “has also taken to the handball code in a big way and indeed some of them would do themselves justice in our champuionships here at home. Ray Wedon, for instance, can scotch-toss or butt a ball with the best, while P Canton and H Shedani, who is of Lebanese extraction, are also up to the same high standard.

“The reigning champions are R McInerney, B Kelleher, B Muldoon Jnr, V Pale, L Burns, B Solan, B Moore and G Coucoukarkis, who is of Greek origin.

Brendan Muldoon was honoured with an award that year by the Irish Handball Council in recognition of his services to the sport. The legendary journalist Padraig Puirseal, in his column All In A Day’s Sport, mentioned on January 25, 1964 how he had enjoyed a chance encounter with then-IHC president Joe Lynch on the street. Lynch had informed him about the presentation to Muldoon and about further plans.

“Indeed,” wrote Puirseal, “it is hoped to send a couple of our own Irish handballers out there on a tour if present plans materialise.”

That was backed up in another contemporary newspaper report, which stated:

“South Africa will not compete in the World Series in New York this year [1964] but Mr Muldoon is hopeful that in a year or two, a couple of our top players will make the long journey to the country of his adoption to demonstrate their handballing skills.”

Handball, wrote Puirseal, was “flourishing” in South Africa at the time. So how is it now?

3: And it’s still being played in India, of all places...

We’re confident when we say that Loyola School in Jamshedpur, India is the only location where handball is played on that entire sub-continent.

Nirvik Mitter, a former student, confirmed last year that the game, which was introduced in 1947 by an Irish priest named Fr Keogh, remains very popular. In recent years, two extra courts have been constructed. 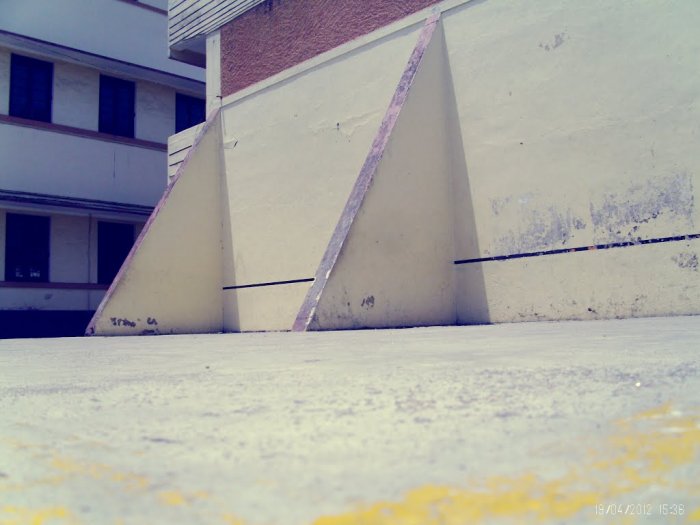 “Mostly students play but Loyola fathers and brothers do play as well,” he said. Mitter also stated that a racquetball is used to play with.

A 1949 article in the college journal had this to say:

“The originator of Handball at Loyola is one whom all of us know: Father Keogh. When the American Fathers came to Loyola (I mean the first group), Fr. Keogh, the unforgettable Fr. Bakewell and Fr. Enright, handball was not as much as a twinkle in the eyes of the small group of Loyoleans.

Our new sports organiser was Fr. Keogh who introduced us to an entirely new game called Handball. We gazed open-mouthed at seeing a human hand take such a lot of punishment. But despite this, Fr. Keogh taught us this game and how to play it.

“Oddly enough, we took such a liking to it that soon the front walls of Loyola were under heavy punishment from the two handball courts which were set up. Some of us liked it so much that we deprived ourselves of breakfast in order to be early enough to have a game of handball before classes began.

“Handball has now been played here for the last two years. By now it has become as common to us veterans as drinking water. Still it lingers, and still the handball spirit is kept alive by occasional tournaments.”

Amazingly, the game seems to have grown in popularity in the intervening years – Loyola School may well be the last ‘uncontacted tribe’ in the handball community.

4: There are strong links to Hollywood...

Handball has featured in tons of huge movies including – just from memory – Saturday Night Fever, Sleepers, Robocop, almost every prison movie (including the Birdman of Alcatraz) and many more.

In Flawless, Robert De Niro stars alongside Philip Seymor Hoffman and plays a retired hero cop who spends his days on the court. And Knockaround Guys was as close as we’ve come to an actual handball movie, with much of it filmed on location at the Coney Island courts in New York and a number of well-known American one-wallers coaching actors Dennis Hopper, John Malkovich and Barry Pepper. 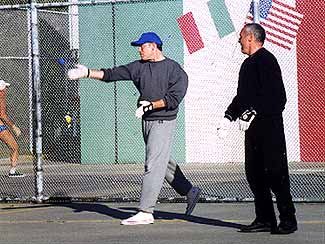 Back in the 1920s, Harol Lloyd – a superstar comic actor who ranked alongside the likes of Charlie Chaplin – was a handball nut and built a court in his mansion in Hollywood.

Here’s a clip of De Niro playing handball in Flawless.

5: And it used to be the cross-training sport of choice for world famous boxers...

Countless boxing stars have tried out handball as part of their training, as any player who has visited the New York Athletic Club, where the walls are lined with photos of champs such as Rocky Marciano and Jack Dempsey playing handball, will know.

New footage has recently surfaced of fight legend Harry Greb playing handball, also (here: https://www.youtube.com/watch?v=ZNE6V_RyBwg). And, in possibly the most famous handball publicity shot of all, Mike Tyson played the game in Las Vegas back in the 1980s.

Steve Lott, a personal friend of Tyson’s who worked for Tyson’s manager (and handball legend) Jim Jacobs, related the story a couple of years back of how Tyson, preparing to fight Tony Tucker in July, 1987, tried handball.

“So I brought them down, they put on the handball shirts and the gloves and threw the ball up a few times for two minutes, and, click click click, I took some photos.

“They were smiling and I said, ‘Okay, let’s go’. It was two weeks before the fight, I didn’t want Mike playing handball, just posing for a photo. So when I took the shots I started to walk off the court and Mike looked at Jim and said ‘hit it up’. Jim looked at me and turned to Mike and said ‘the fight is in...’ but Mike says [insistent] ‘hit it up!’

“So Jim says ‘Just one, Mike’. I walked to the front of the court and I knew this was my chance to get the one shot. So Jim hit a soft overhand serve and as Mike backed up and hit it, click, I took that shot! Mike hit the ball back, we asked him was his hand okay, he said ‘yep’, and we walked off the court. I knew it my one chance to get that shot, and I got it, it was sensational...”

While Tyson wasn’t a handball player, he was familiar with the sport and, as anyone who has seen the famous photo knows, had the form down.

So, there you have it. You learn something new every day...