The All-Ireland Ladies Senior Softball Championship kicks off this weekend at the QF stage with the big two of Martina McMahon & Catriona Casey the top seeds.

Limerick’s McMahon will be bidding for her 3rd straight title but standing in her way this weekend is Sligo’s Laura Finn. Ballymote’s Finn has enjoyed success in the big court in the last two years, winning the Junior B and Junior titles back to back.

Softball has always been her code of choice, but Finn is active across all codes and is part of a thriving Handball Club at NUIG where she is due to start a Masters in Accountancy in a few weeks having already completed her degree at NUIG.

A quick browse through the record books and it can be seen that Finn was the first Sligo female to have won an All-Ireland title in any code and age category when she won the Softball Junior B Singles in 2018. She followed this up with a win in the same Doubles grade with Sara Coleman, and has also won a Ladies B Wallball Nationals title last year.

So she is starting to develop a winning habit and break barriers for Sligo Handball.

“To be honest I wasn’t aware that I was the first winner. But that is nice to know and hopefully it can inspire more winners from the county, especially young girls.” 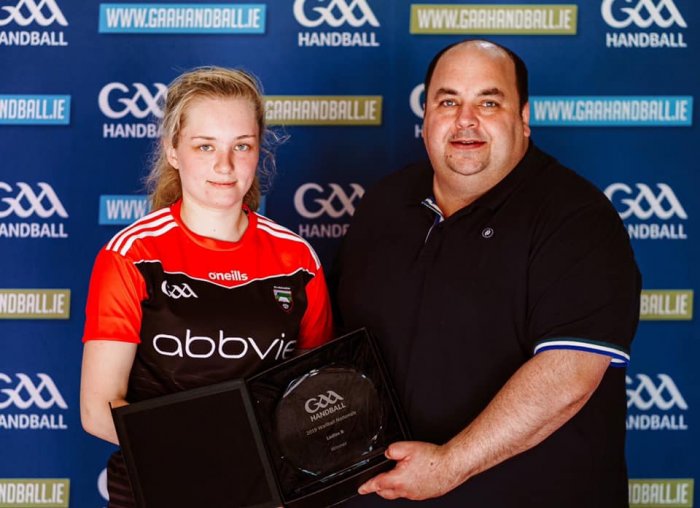 An Intermediate title was the initial goal this year, but with the reduced capacity for grades this year due to the Covid-19 pandemic, the Intermediate grade is not being played.

So undeterred Laura took the plunge and entered the Seniors for the first time, and despite her daunting opener she is excited about her Senior debut.

“I have never played Martina before but she is one of the best handballers in the world so it is a daunting experience. I appreciate it is a big step up from my last Championship outing at Junior level, but I believe I will learn a lot from it. I was obviously disappointed not to play Intermediate but nonetheless I am just looking forward to playing competitive handball again. I've been training hard all summer for it.”

I usually train with my brother Cormac and also some of the older men in Sligo such as Francis McCann and Gerry Coleman. Despite the limited numbers playing in Sligo at the moment, she does see encouraging signs of progression for Sligo Handball.

“Sligo Handball is definitely on the up. We had our first ever Juvenile All-Ireland Champion last year when my brother Cormac won the U15 Softball Singles, and we also had two juvenile members that were meant to be competing in this years 4-Wall All-Ireland U16D Final (Cormac Finn & Eoin Kerrigan) but they unfortunately got postponed.”