Paul Fitzpatrick spoke to the brilliant doubles pair from Wexford who won the first-ever title in the Irish Handball Centre at the 1970 World Championships.

For Dick Lyng and Seamus Buggy, it nearly didn’t happen. In the build-up to the 1970 World Championships, the most-hyped handball event ever to be staged in Ireland, some of the top players in the country were forming novel partnerships to try to make the official Irish squad.

Having won the All-Ireland Senior Doubles title earlier in the year, the Wexford men decided to stick together and give it a lash. But when they lost out to the brilliant McEllistrim brothers from Kerry at a trial in Talbot’s Inch in Kilkenny, all seemed lost.

“Everyone was entitled to a trial and there were lads playing with fellas from other counties. But myself and Dick were after winning the All-Ireland, which was the last final played in the old court in Croke Park,” remembers Buggy.

“The trials were coming up after that and we decided we’d stay together for the trials, we thought we’d have as good a chance as anybody.

“There were two groups. We were in Talbot’s Inch and we had finished our last game and the two McEllistrims from Kerry only had to win their last game to get through. They played Paddy Lee of Wicklow and Dessie McGovern from Meath, who were a good pair. And the two boys beat the Kerry lads which brought us back into it.”

Lyng, one of the greats of a glorious era, remembers it clearly, too.

“The McEllistrims beat us in the group and then they lost to the last pair who hadn’t won a game,” he recalls, “but they lost it and that brought us back into it. We beat them in a play-off then a a few days later and that got us on the team.”

Says Buggy: “We went in against the McEllistrims in Kilkenny again on the Wednesday night and we beat them in the third game. It was very close, they were great games.”

The Wexford men would go on to bring honour to that famous sporting county by winning the World Championships, creating history in the process as theirs was the first world handball title to come to this country.

But they were no strangers to fierce competition; getting out of Wexford itself was gruelling.

“The standard of handball in Wexford was unbelievable,” says Buggy.

“There were six players who had All-Ireland senior medals in the county: myself and Dick, John Quigley and Pat Murphy and Joe Howlin and Jimmy Goggins. Joe Howlin was beaten in an All-Ireland Senior Singles final by Pat Kirby and anyone who gets to that stage is a fair player. Jimmy Goggins won the doubles with Dick and so had John Quigley and then Dick and myself won it three times.

“Handball in Wexford was extremely strong. There were six of us and until Pat Kirby got the whole thing opened up, only one could play in the Senior Singles, the other five would be sitting on their backsides playing in the county.”

Even for Lyng, who won the All-Ireland Senior Singles at 22 and was the first man to win the Singles in Minor, Junior and Senior, the county championships were intense to say the least. And when a player managed to escape his own county, he was faced with a minefield nationally.

“Wexford was tremendous that time. It was nearly as hard to win a county championship as an All-Ireland. That time, when the open draw came in, you could have 48 players in the All-Ireland Senior Singles. Okay there would be two or three favourites, Joey Maher or Pat Kirby or myself, but there were about 20 fellas who could beat you on a day, the standard was that high.

“There were six senior players in Wexford, Kilkenny had five or six, Mayo had some, Dublin had four or five, you had the Kirbys in Clare. The competition was fierce.”

With the new court in Croke Park, the game had a facility to match or surpass that of any sport. Every player in the country wanted to win his way to HQ for the big finals nights.

“The All-Ireland started off in April or May, it went along with the hurling and football championships and the finals would be the night before in Croke Park and that was a huge occasion always.

“The court itself was great. At the time, we couldn’t believe our eyes, going into play handball in a court with three glass walls and with such a crowd. And then we had the President and all there – I think I met four or five presidents going back to Dev! The Artane Boys Band was there too. It was huge.”

In handball terms, though, nothing surpassed the 1970 World Championships. Lyng and Buggy cantered to the doubles title, winning the final against Americans Simey Fein and Ray Neveau 21-5, 21-12, with both freely admitting that the Irish players were a cut above the foreigners who were not used to the traditional ‘big alley’.

While the overseas players were excellent in their own right and adapted as best they could, they were no match for the Wexford men. Buggy was 26, Lyng 27, and they were in the prime of their careers and playing out of their skin.

In the singles final, Kirby, representing the USA, came out on top against Joey Maher on the Saturday night, with the doubles decided the evening before.

“Lyng, a native of Ballyanne and Buggy, who hails from Wexford Town, will surely set bonfires blazing in the Model County,” reported the Irish Independent’s Tom O’Riordan of the Irish pair’s “magnificent” victory.

“I might as well tell you. There was USA, Canada, Mexico and Australia – they didn’t have a hope in hell of beating us in our own game. The Americans were over for a couple of months beforehand to acclimatise and they were the pick of them. They were very good players but they weren’t used to our court.

“The biggest thing was to win the trials to represent Ireland. After that, we were never going to be beat.”

The Yanks came arrived with their USA jerseys and one of them came into the court. ‘Jesus,’ he said, ‘it’s like an airport!’ All he had ever seen was a 40x20 court.

“They adjusted as best they could. For us, it was tough to get there but to tell you the truth, there were 20 pairs in Ireland who would have won it. Getting there was the thing.

“There was a huge crowd there the night of the World Championship finals. It was packed. You’d be roasting inside the alley and you’d look out and there would be a fella with a pint of something. And in the alley, your tongue would be out!

“Don’t get me wrong, it was a big thing. There was a homecoming, we got a big reception from Wexford county council. There were a lot of fellas there who had never seen a game of handball! But yeah, it was huge, there was great excitement around it.

“I never took myself too seriously. But the World Championships was great, it was the occasion moreso than anything.”

For Buggy, wearing the Irish jersey on such a big stage was the highlight of a very successful career. 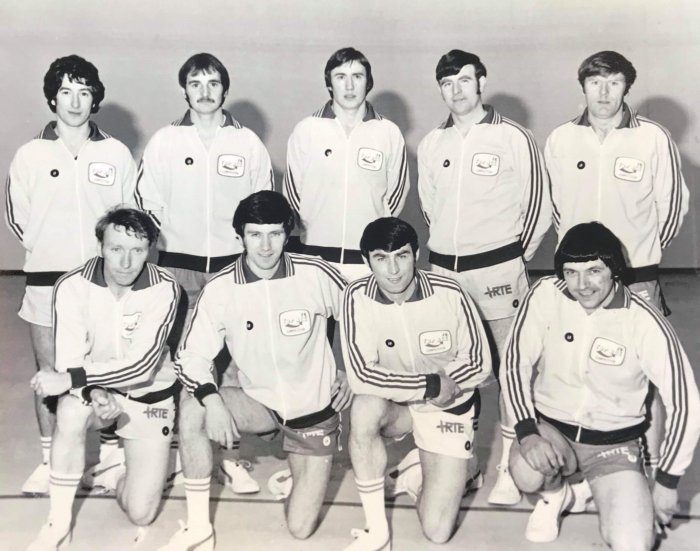 “There is nothing like representing your country. The President of Ireland was there, everything was done to a tee. It was the first world handball title that ever came to Ireland so it was special.

“The World Championships was a massive deal. The games were on for a week, Monday to Saturday. The final was on the Saturday night, October 10th. It opened with Ireland versus Canada, USA versus Canada, Mexico versus Australia and then it alternated.

“There used to be between 1200 and 1500 people there, they came from all over Ireland for it. I still have the programme here. There was a ladies exhibition match on the Wednesday, Dublin versus Oldtown. The two sidewalls and the backwall were glass.

“I never minded the glass one bit, I used to love playing in it. Fellas would get this thing into their head that they weren’t fit to play in it but it was a great court.”

The game moves on, of course. Seamus never misses an All-Ireland Senior Singles final, although handball has changed a lot, he feels, since he was at his peak.

“The game is different. The lads today are superb, you couldn’t compare it to when we were playing because they have so many different shots. It’s like trying to compare years ago, old Jack Dempsey against Cassius Clay, or hurling today or hurling in the 1960s, there’s no comparison.

“Plus, the ball today is a hell of a lot faster. It was just a different era. But I enjoyed every minute of it.”

Buggy began his career in a little outdoor alley at Clonard, outside Wexford Town. It has since been torn down to make way for the motorway but the memories remain.

While Seamus went on to enjoy much success as a Masters player, Lyng played a bit of overage handball but eventually hung up the gloves. Although he played some of it, he was not a fan of the 40x20 game – but the Ballyanne man will also be remembered as one of the kings of softball, a four-time winner of the Gael Linn who vied with the likes of Maher and Kirby for supremacy.

His last Senior Championship match was against another man who would go on to carry the mantle.

“The last senior game I played for Wexford was against Ducksy Walsh up in Clonmel. I was 40 and Ducksy was only 20. He beat me that night and I said to him that night, if I’m not able to beat you at 40, I won’t beat you at 41! I was after having a good innings anyway.”

And handball is played and spoken about, that innings will never be forgotten for either of the 1970 world champions, even now, half a century on. Fifty years not out and still going strong.