The National Launch of the John West Féile 2019 was held in Croke Park today Tuesday 16th April. The Féile na nGael Handball Event is part of the All-Ireland Féile Club festival for all GAA Clubs aimed at both Boys and Girls at Under 14 years of age. This year’s Féile Handball event takes place in Cork on Saturday 15th June with Féile Hurling, Camogie and Football on separate weekends.

Uachtarán CLG John Horan said: “Féile is one of the most significant and successful initiatives in the history of the GAA. It plays a hugely important role in the massive work which takes place within underage coaching and development every year.”

Also speaking at the announcement, John West Country Manager Peter Rooney said:“We are delighted to extend our partnership with Féile until 2022. The Féile is a unique series of events which hold a special place in our hearts. The competitions highlight the importance of sport in children’s lives, which is something John West is truly passionate about, and it also allows us to educate on the importance of protein in children’s’ diets.”

Representing Handball was GAA Handball President Mr Joe Masterson and David Walsh (Cork). David stated his Féile days were memorable and very enjoyable. “I was lucky enough to compete in the competition four years, travelling to many different Counties in Ireland, winning Division 5 in my first year and being runner up in Division 3, Division 2 and Division 1 finals in the following 3 years with my club, Mallow. The excitement and comradery of being with my team and socialising with other clubs nationwide are memories I look back on fondly”

Also, in attendance today at the media zone was members of the Clogh Girls Division 1 winning team from 2018 - Amy and Katie Brennan. They were interview by Damian Lawlor (Sky Sports) as part of the media plan.

The closing date for the Féile Handball competition is this Friday 19th April, so don’t miss out in entering your club team in this the premium juvenile club competition of the year. 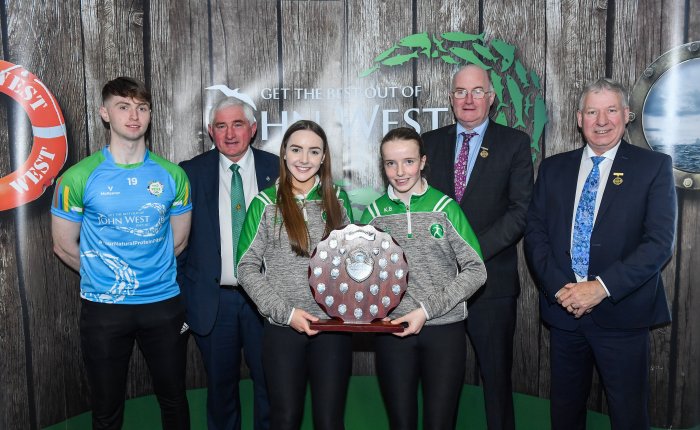