Catriona Casey has yet again saw off all challengers as she stormed to her 6th She's Ace title at Breacach HC, Tyrone,

The unique 1 day national ranking event was played alongside the National She's Ace Festival Weekend, GAA Handball's annual, premier Ladies in Handball event that sees females ranging from 11&U through to 40+ compete in 4-Wall & 1-Wall grades in a hectic, yet very enjoyable weekend.

11 of Ireland's top females took part in Saturday's Elite Tournament, playing in a novel 1x31 set, rally scoring format. That led to some cracking, nail biting battles in the group stages, notably a 31-30 win for Laura Finn (Sligo) over Noelle Dowling (KK), and a 31-30 win for Cuillean Bourke (Mayo) against Caitlin Conway (Tyrone).

Regardless of the format however, it was still the top four seeds who qualified for the SF's. Home favourite Eilise McCrory served excellently all weekend, putting on a bit fo an exhibition at times. She started brightly and had Catriona Casey on the back foot early on in SF1, with her serve and shoot mentality. But Casey eventually worked her way back into the game, taking control of the court and seeing out the win 31-13.

In SF 2, Fiona Tully took the early lead 14-6 against Megan McCann, but the Armagh player showed grit and fought her way back to 19-16, as the crowd enjoyed this close encounter. Tully appeared to find an edge on her opponent as the game entered the final stages, pulling away for the second time to seal the win 31-23. 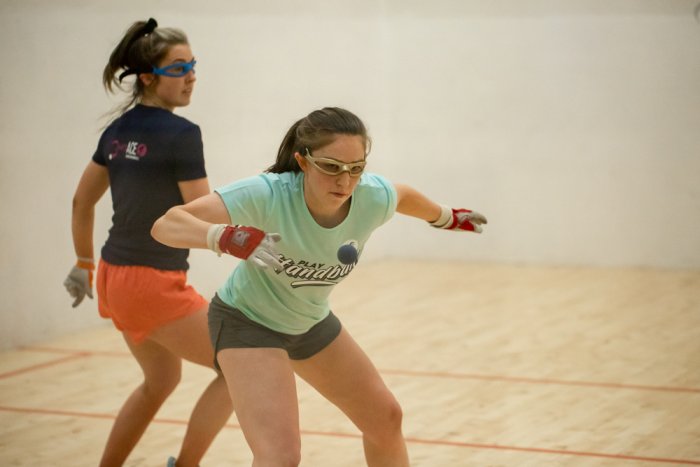 In the Final, Casey started very brightly, dominating the front court and picking off kills with both hands. Tully struggled with Casey's accuracy as the Cork star powered home to win 31-13, and her 6th She's Ace title in what is the 8th edition of the event.

Next up for the Elite Ladies is the Irish 4-Wall Nationals in Belfast in a fortnights time. 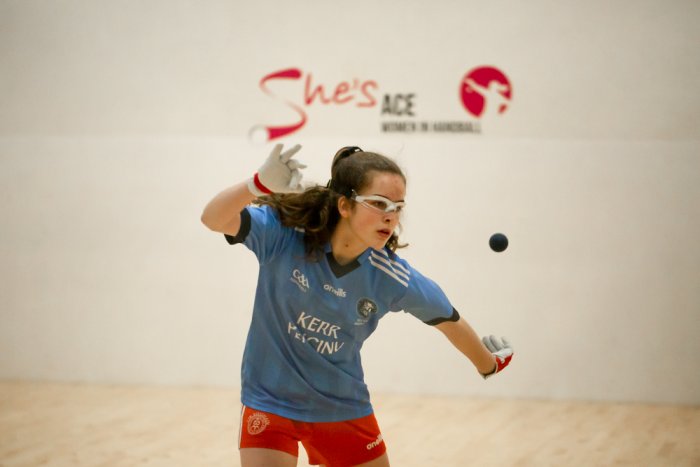 Six other grades were played to their conclusion throughout Saturday in various venues across Tyrone, before the Finals being held in Breacach before the Elite Final.

The 11&U section was played on a Go Games format, ensuring the future stars received lots of matches.

The 13&U Final was arguably the match of the day in terms of gripping entertainment as local girl Keeva Owens (Breacach) came from 24-20 down to defeat Lucy McCullagh (Loughmacrory) 25-24. Caislin Treacy (Greencastle) came out on top of a close match against Laura Duff (Loughmacrory) 25-20 in the 15&U Final, with Hannah Grace (Lahorna) also prevailing in a close 25-21 17&U Final win over Jodie Keeling (Wexford).

GAA Handball would like to thank all of the host venues; Breacach, Carrickmore, Killyclogher, Loughmacrory & Greencastle for their support in running this event, which is a key part of our Ladies in Handball programme. 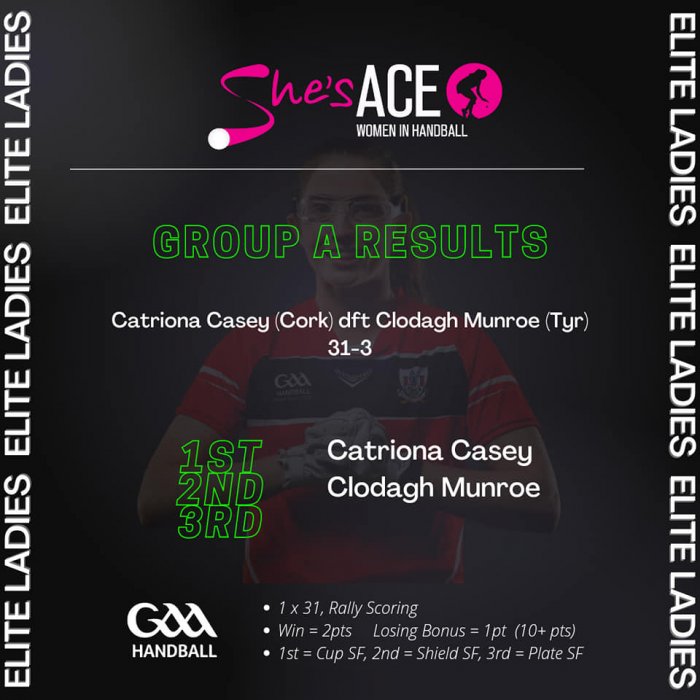 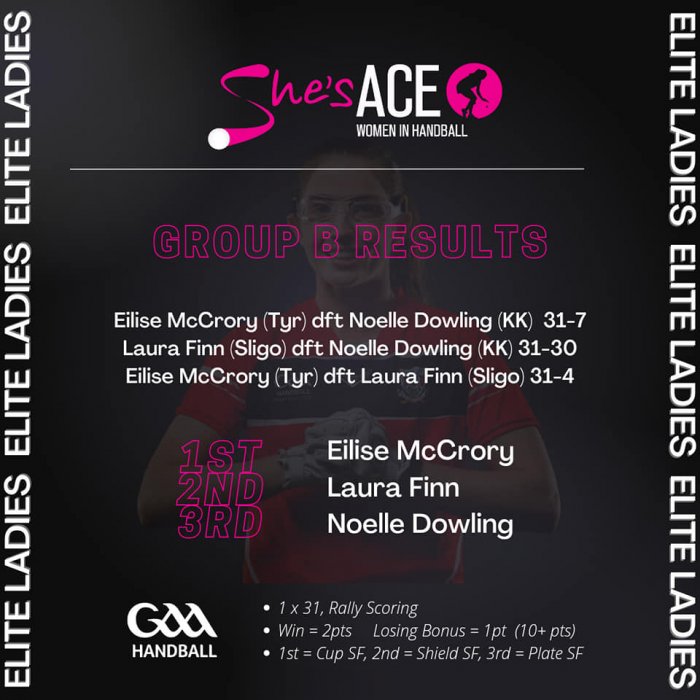 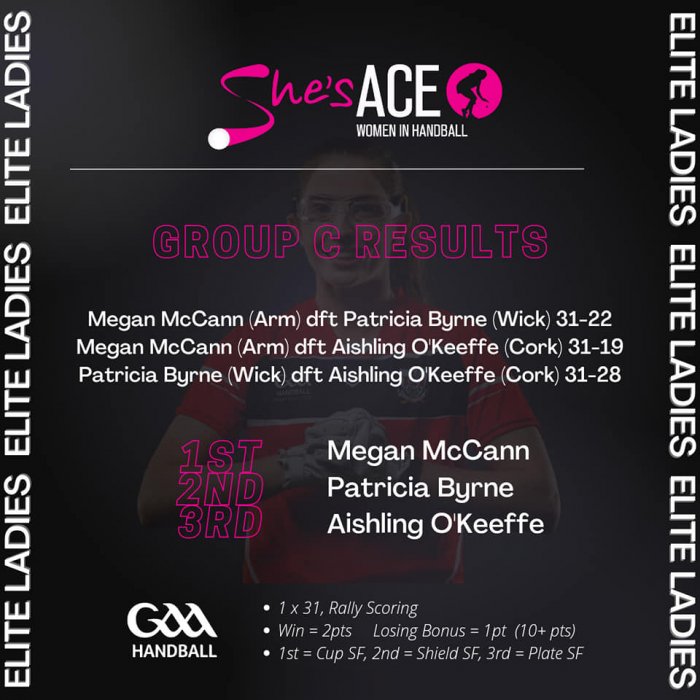 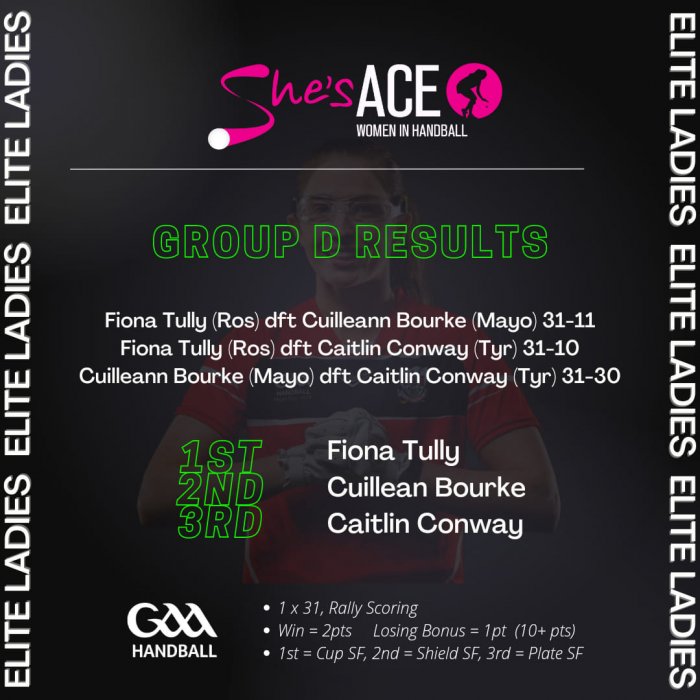