While the Clár and the competitions may be tweaked from time to time, some things in handball rarely change. On Saturday last, Tyrone’s Conor McElduff and Cork’s Catriona Casey took top honours, winning the All-Ireland Wallball Senior Singles titles in the Men’s and Ladies grades respectively at the Convent of Mercy School, Roscommon.

For both players, it marked a hat-trick of successes in this particular competition. 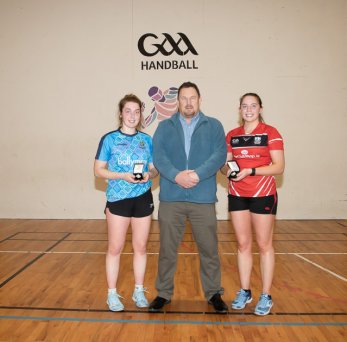 A large crowd descended on the Connacht venue for the semi-finals and finals of all grades. While there were a number of drop-outs, which was disappointing, the standard was high across the board and the streaming cameras were on hand to record some excellent matches.

McElduff was impressive in defeating London’s Colm Grace, a Kilkenny native based in the UK, in the semi-final and Tipperary’s James Prentice, who recently partnered star hurler Jerome Cahill to Intermediate Doubles success in the 60x30 court, in the decider. 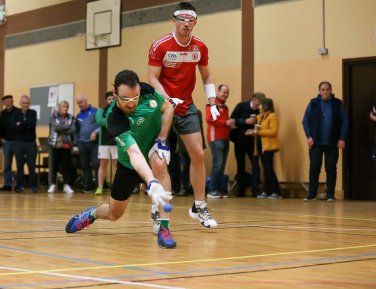 Casey, meanwhile, was pushed hard in the second game of her semi-final against Westmeath’s Aoife McCarthy and needed a tiebreaker in the final against local favourite Fiona Tully, who saw off Tyrone’s Eilise McRory at the penultimate stage.

The Men’s Minor title went to Armagh’s Fiachra Ó Dhúill, who played superbly to defeat Cormac Finn and Eogan Daly, while Jodie Keeling of Wexford continued her good recent form with victory in the corresponding ladies final. Jodie’s superb underarm game saw her control the front court as she defeated the very promising Alanna Coggeran from Kilglass in Roscommon, a club where wallball is really thriving. 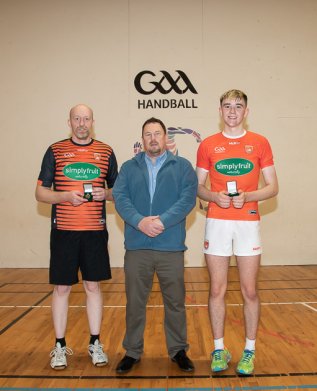 The talented Oisin Ó Neachtáin from Galway claimed the U14 title against Thomas Finn from the Abbeylara club in Longford, whose handball genes are good; his father comes from the Sligo handball stronghold of Ballymote. Thomas’s success is a great boost to the midlands club.

This game was an interesting clash of styles with the nimble Ó Neachtáin pulling off some gutsy shots at the right times to take the honours.

The U16 titles went to Cork’s precocious Carmel Kelleher and Cian Dunning as they defeated Ava Sweeney (Galway) and Shea Munroe (Tyrone) respectively with two impressive displays which bode well for the future in the Rebel County. 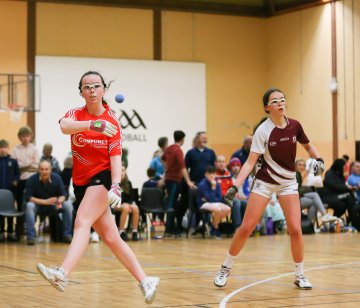 The Junior A and B Singles crowns went north as Loughmacrory clubman Paul Donnelly and Saval, Co Down’s Jack Turley came out on top. Donnelly beat Waterford’s Anthony Fitzgerald, who also reached the JS final in the ‘big alley’ this year, with a superb display while Turley was brilliant in turning back Cork’s Darragh Ducey.

But the seniors were the stars of the show on the day as McElduff and Casey showed their class.

McElduff, who missed the recent Frontball event in Biarritz due to a neck injury, was a happy man after claiming his third senior All-Ireland in wallball.

“This is my third Senior All Ireland in the One Wall code, feels great to win it, it’s no secret at this stage how much I enjoy the One Wall season,” he said.

“I hope with the new dates set in the Clár for next year we get great numbers playing again.”