The construction of the handball centre in Croke Park was closely followed by the launch of Top Ace, an innovative television series. Paul Fitzpatrick looks back on a glorious era for the game.

Handball followers – and even casual sports fans with a grá for the game – often hark back to the era of Top Ace. The groundbreaking television series was the brainchild of RTE duo Michael O’Carroll and Mick Dunne and, off the back of the general feel good factor which the construction of the new centre at Croke Park engendered, it saw the sport’s fortunes boom in the 1970s and 1980s.

The series was highly innovative and not just in obvious ways. For one thing, handball had never before been broadcast in colour in this country.

And, for another, there was the change of ball. Before the inaugural series commenced in 1973, O’Carroll, the RTE programme director, approached Dunlop with a problem – the traditional black handball was not ideal for television purposes.

Some of the top players were consulted and stated that an amber or red ball would be acceptable. In the end, batches of both were made and the players tried them out. Conclusively, they opted for the red ball. The television men were delighted and the red ball was such a success – regardless of TV, players found it easier to see in general play – that it stayed. 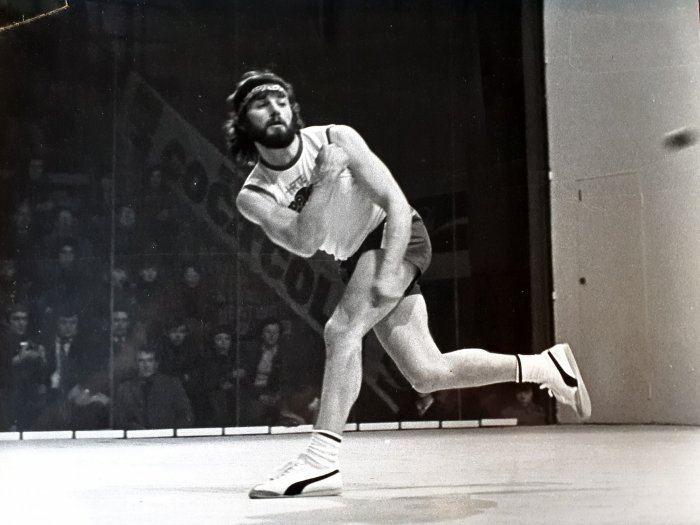 Top Ace, billed as being devised by the RTE sports department in conjunction with the Irish Handball Council, was really Mick Dunne’s idea. The famed journalist was a keen handball man and a great friend to the game who had the connections to make it happen.

The first series, which hit the screens on Wednesday, February 7, 1973, featured eight players,

Four had world titles to their names – Pat Kirby (1970 singles), Joey Maher (1967 singles) and Seamus Buggy and Dick Lyng (1970 doubles) – while the remaining quartet were also very successful on the ‘domestic’ front.

The early rounds were played on a 15-minute timed basis with the final extended to 25 minutes.

The handball was featured as part of what was a new weekly sports programme, Action 73. It ran for seven weeks with the final screened on March 21.

A 15 inch x 15 inch glass panel in the front wall allowed for a new camera angle and the quality of the coverage was a revelation. 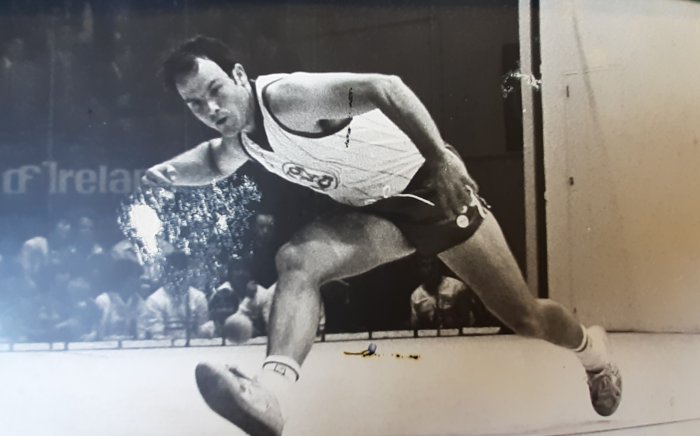 The commentator was Dunne, assisted by Roscommon’s Ray Doherty, himself a fine player and author of a successful book on the game. The referee in all matches was Phil Murray, secretary of the Leinster Handball Council.

The series opened to rave reviews in the newspapers.

The Irish Press reckoned the series would “acquire a widespread enthusiastic following” and would, in fact, revolutionise the sport in this country.

“An influx of new players into the ballcourts Ireland is inevitable and the onus of providing comfortable accommodation with accompanying suitable social atmosphere is the responsibility of handball administration in its broadest sense,” their reporter opined, adding that “it has been proved conclusively in other non-field sports that irrespective of the particular merit of the game itself, the atmosphere of the environment will attract both players and spectators.”

In the semi-final of the first Top Ace, Maher came from behind to defeat McEllistrim in the final moments of a thriller. In the final, Murphy, the top player that year, beat the Drogheda legend 23-16 before a huge audience. The success of the format was proven.

“Viewer reaction was so favourable that RTE Head of Sport, Fred Cogley, has already decided that the tournament will be slotted in as an annual part of the station’s sport schedule,” reported the Irish Independent.

For season two, more innovation ensued. The front wall was painted sky blue. Four players were invited and qualifiers were initiated to fill the remaining slots. Interest was huge.

At handball Congress the following March, President Joe Lynch – an enthusiastic supporter of Top Ace and one of its key architects - sang the praises of RTE for their support. The game in general was flying high, he reported – that very weekend in Croke Park, the final stages of the Gael Linn Cup were being run off, with the field of 1,240 players (632 from Leinster, 304 from Connacht, 208 from Munster and 96 from Ulster) having been whittled down to eight.

The series continued to go from strength to strength. In 1980, the 40x20 court was introduced to the competition. The visiting four-strong American squad expressed a wish to be allowed to compete in the 60x30 court too and the authorities here were happy to oblige, which meant both ran side by side.

The international dimension gave the series fresh impetus; by 1984, there were players from Britain, the United States, Canada, Mexico and Australia entered as well as the Irish. Interestingly, that was also the first year in which games were switched to a ‘one service fault’ system.

But all good things come to an end. In 1986, RTE confirmed they would discontinue the series. Handball officials were severely disappointed, with the offer of a live broadcast of a Senior Singles final not much consolation.

Lynch, while recognising the strong relationship which had been built up with RTE, was sickened, as he wrote in his annual report.

“There appears to be,” he complained, “a wind of change blowing and coverage is becoming more difficult to come by. It is difficult to understand why so many important canned programmes are being foisted on us to the detriment of our national pastime.”

While handball returned to our screens intermittently since, notably with a regular slot on Sports Stadium in the early 1990s, things have moved on. Smaller sports no longer can command primetime slots but with the changes in means of communication, new avenues have opened.

GAA Handball have focussed on live web streaming, where it is possible to replicate high quality broadcast standards for a fraction of the cost. The days of Top Ace, though, remain very fondly remembered in the handball community.