The cream of Ireland’s Juvenile Softball players converged on Moycullen and St Comans today to battle it out for the 2019 MyClubShop.ie All Ireland titles in the Softball code. Eleven counties in all competed with Cork topping the medals table with FOUR titles. Galway, Roscommon and Tipperary took home two while Clare, Kilkenny, Sligo, Tyrone and Wexford all taking one title back to their respective counties to complete a very successful weekend of Handball.

The game of the day was the Boys U16 Singles Final with Galway’s Mikey Kelly in sensational form against Kilkenny’s Billy Drennan in a high-quality match. Kelly powered his way to take the first 21-1 as he controlled the game from start to finish with some excellent serving and killing shots. The second game was brilliant with them level on no fewer than FIVE times by the time it reached 8 all. Then Drennan went 15-8 up before Kelly with 3 wonder shots brought it back to 11-15. Another great serve from the Abbeyknockmoy player made it 13-15 and then suddenly it was 15 all and then 17 all to the large crowd’s delight. Kelly got the important next point and with some excellent high 3 wall serving and a ace to finish Kelly took the title and the match 21-1, 21-17 to the roar of the large Galway supporters. 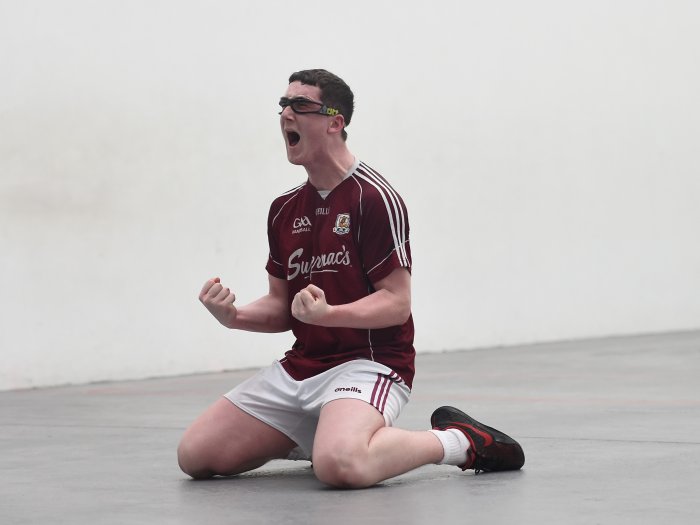 The Girls U16 Singles Final was almost as good with Galway’s Sadhbh Ní Fhlaithearta almost causing a major upset as she took a commanding 17-2 lead in the first game with some terrific play against Kilkenny’s Amy Brennan. Brennan had to dig deep to claw her way back to 12-17 but the Galway girl went 18-12 up at this stage before the experience Brennan tied the game at 18 all. Brennan then led game ball 18 but Ni Fhlaithearta to her credit got to 19-20 but Brennan got back into serve and closed out the first 21-19. Brennan took an early 5 nil lead in the second before she extended it to 7-2, Ní Fhlaithearta tired hard at this stage to stay with Brennan but Brennan extended her lead to 14-3 and then 18-4 before taking the match 21-19 and 21-4.

Galway also claimed gold in the Girls U14 Singles as Emma Kinane defeated Wexford’s Jodie Keeling in two games, whilst Roscommon's Rory Carthy was an impressive winner of the Boys U14 Singles when he overcame Wexford’s Conor Creane.

Congratulations to all the players, parents, coaches, referees and sincere thanks to the host clubs of Moycullen and St Coman’s for their hospitable and finally thanks to all that travelled to support these Juvenile Softball Finals.