The hugely successful Team Ireland that competed in last year’s World Championships and took home 20 medals was today honoured by Uachtarán na hÉireann Michael D Higgins at a reception in Áras an Uachtarán.

The Uachtarán addressed the Team and management and spoke of his experiecnce in Handball as a young boy growing up in county Clare.  In his speech President Higgins paid tribute to the 16 players who represented Ireland in August in Calgary and complimented them on their medal haul of 20 medals from the games.

Representing your country on the international stage is the ultimate achievement for any sportsperson. I am very pleased to have the opportunity to pay tribute to you, directly, for representing Ireland so admirably. The fact that the Irish handball squad brought home with you 20 medals is indeed proof of your skills and talent.

The Gaelic Athletic Association is a wonderful ambassador for Ireland and each of you who represented your country so well at the Calgary World Handball Championships should rightly feel proud of the contribution you have made not only to Ireland's sporting legacy but to Ireland's reputation abroad.

The Uachtarán also spoke of his own experiences in Handball growing up and joked about his experiences playing in the famed Gael Linn competition when he spent the most uncomfortable half hour of his life playing the legendary Pat Kirby. He did manage to get him out of serve but unfortunately that was as good as it got for the future President of Ireland who knew then that Kirby and Handball were destined for bigger things.

When I was growing up, the handball alley was a key landmark of most villages and the game was a key part of the social life of small towns and villages across the country. I am delighted therefore to see the recent growth of interest in handball both at home and abroad. With over 200 clubs in Ireland consisting of 12,000 members, the resurgence of interest and awareness of the sport I am sure is a source of great pride and pleasure for all of you. Today, with such excellent ambassadors as Paul Brady and Aisling Reilly for today's young handballers to look up to I am sure the growth and development of the game, in all its different variations, will only continue. 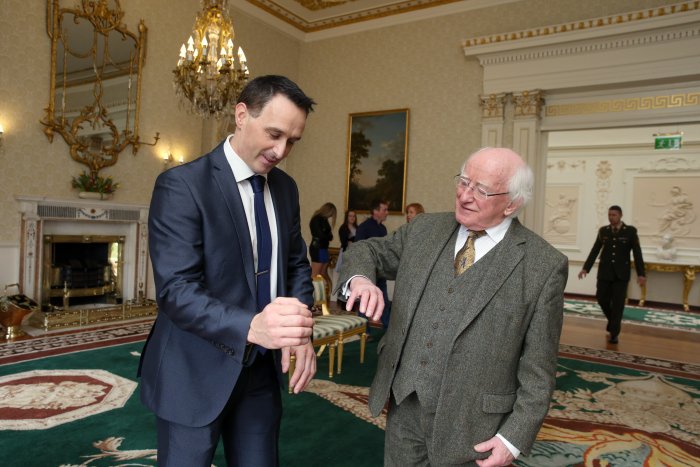 The Uachtarán reserved special praise for 5 time World Champion Paul Brady who he said was a fine example of athletic ability and had done his country proud with his successes over the past number of years.

Concluding his speech the Uachtarán paid tribute to the support network that exists not only in Handball but also in sport in general paying tribute to the parents, siblings, partners and also the coaches, physios and administrators who play such vital roles.

May I take a moment to acknowledge your managers, your coaches and backroom teams, your physios, your doctors, your kit managers and also your husbands, wives and partners and your families and friends for the important roles they play in your success. Although the players ultimately receive all the accolades, each individual’s performance depends on the support of those closest to them, personally and as a team, to help them through their preparations, and we extend our appreciation to all of them for their contribution to your accomplishments.

Following a meet and greet with President Higgins where he spoke personally to every member of the party there was a reception held with refreshments as the President mixed with all present and shared stories and learnt more about the game of Handball today. A great day concluded with a tour of the Áras.