With the forecast giving heavy rain, we were delighted the forecasters got it wrong. With glorious weather in Glengormley, Edmund Rice College’s 3 wall courts played host to a strong field of 21 players coming from 6 different counties.

Due to the casual ‘back to play’ nature of the GAA Handball Summer Series tournaments we had a few late changes to the draw that we were more than happy to accommodate on the morning of the tournament. Five preliminary games got started at 11am. The best of the prelims was undoubtedly young Jack Turley of Saval HC, Down, v Owen McKenna of Davitts HC, Antrim.

With games running on a time basis for 20 minutes or first to 25 points with a fixed 1 minute water break at 10 minutes this game could easily have sat in the round of 8 as the quality was so high. Jack racing into a strong lead with deep serves and fly kills rolling out he was dominating the front court. At the half way point he was leading by 6 points but Owen then seemed to find his range and started serving ace serves both left and right side. With Jack now on the back foot with the gap closing Owen hit a different gear and closed the game out in the last 2 minutes with 5 points to spare. 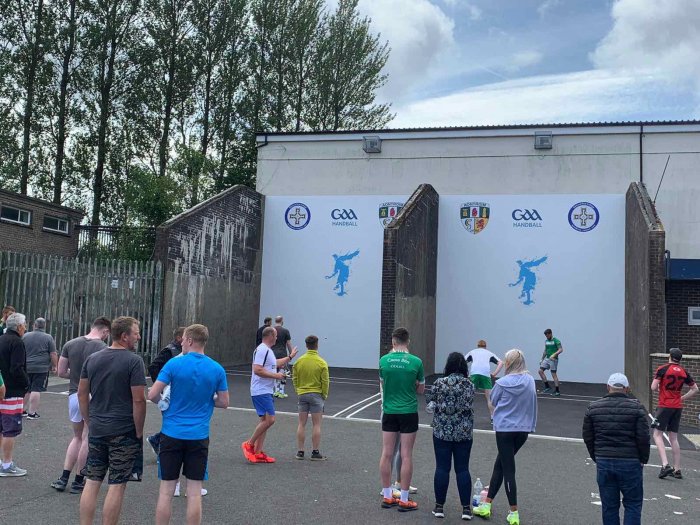 The pick of the games again had Owen Mc Kenna involved as he kept his momentum from his first game and went toe to toe with Martin Mulkerrins who undoubtedly suffered for not having an earlier game to get the court nuances.

At the half time break Martin had found his range and stormed back into the match only for Owens serving to lift a level and put on a masterclass to close out the game 21-15…. Martins race however had not been run. 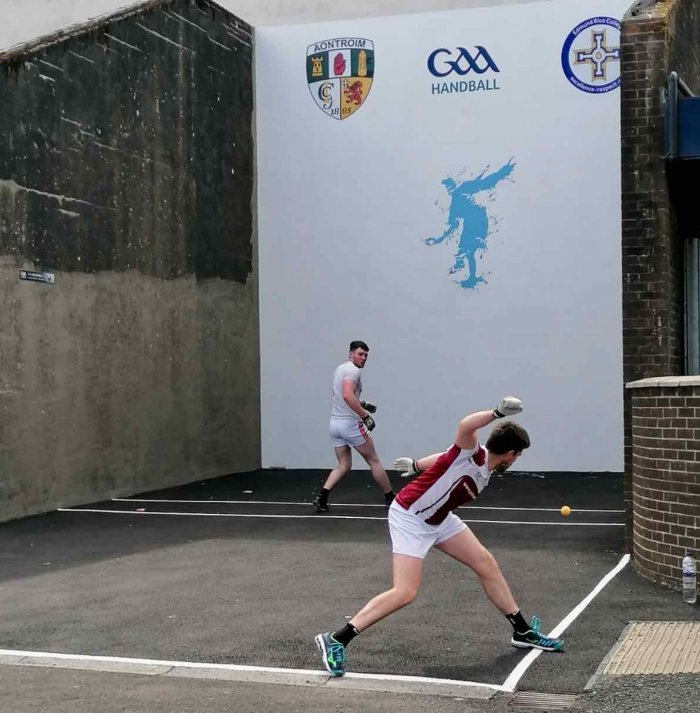 Due to a family commitment and maybe not expecting his round of 16 result Owen Mc Kenna had to leave and Martin Mulkerrins kindly jumped back in to help us out and get another game under his belt…the benefits of a fun tournament!!!

The game of the QF's saw #4 seed Sean Kerr fall to Antrims Jordan O Neill in what was an incredible game up to around the 17 minute mark where Jordan then got in front and dominated to close the game out.

Sean took a few too many risks for Jordan to take a well earned win showing what a vast array of quality shots he has with the wherewithal to choose the right shot at the right time. 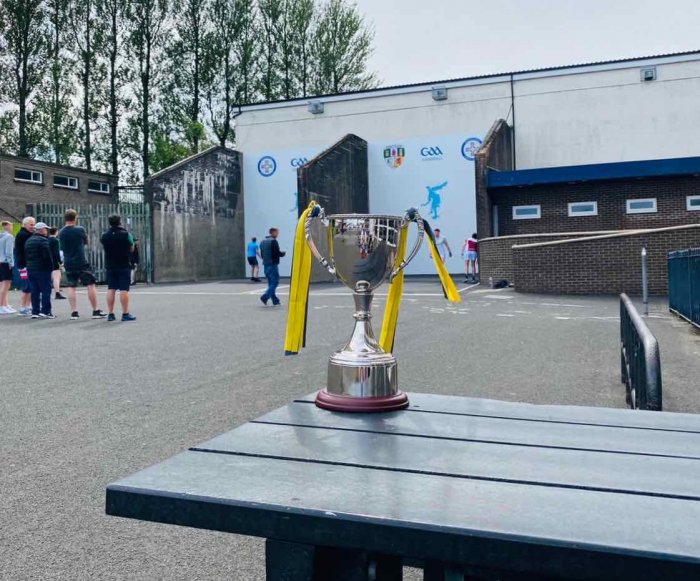 To give context to this group reaching the semi finals in a 3 wall tournament and using their seedings in 1wall terms, its like Federer, Nadal, Djokovic and an upcoming young gun turning up for a local tournament. In GAA terms its an elite group, Charlie Shanks mirroring heroics similar to Seamy Callinan of Tipperary having reached the pinnacle and now fending off the youngs guns like Martin Mulkerrins who's raw power and grit would reflect the standing of TJ Reid of Kilkenny and Conor McElduff in 1 wall delivering years of pure dominance and creating a new level akin to the main flamboyant players we see on the Dublin football team and finally Jordan O Neill, the young gun looking to break the ceiling and mix it with the best. Not having the huge under age success of say David Clifford of Kerry but a maturing ability of say a Kieran Donaghy Kerry who blossomed at early twenties and took off!!

Game of the Semi-Finals was Jordan V Martin. This game was a nail biter and highly entertaining with power and precision from both players it was nip and tuck the entire way through.

At the half time water break it was level. With 2 minutes left Martin gained a 2 point lead and with only 30 seconds left on the clock Jordan got in and served 2 ace serves and on level points served and killed the return with time up to win 24-23….. An incredible win for Jordan and a tough one to lose for Martin, however, as always Martin is a top top guy & sport man and congratulated Jordan and gave him high praise, the crowd giving a well earned ovation to both player for a performance that was just way beyond expectations.

Conor beat Charlie in the 2nd Semi Final 24-15 with a devastating display of what I can only describe as ‘making shots’. It seems theres one or two traditional shot choices on and Conor just has his own idea which he seems to challenge himself to see if he can make the shot nobody else is thinking about.

To some thats a foolish tactic as your perception of capability may not match ability but with McElduff in the grove he seems to be able to control the big ball like no other. A joy to watch and is the example of what the game has to offer. Athleticism, perception, deception, anticipation, pace, agility, strategy, relentless attitude to win are only some of the attributes he displays and that any child can learn should they get involved in handball and pursue excellence. The never ending battle!

In truth, Jordan had such a heavy Qtr & Semi final and without huge rest periods between matches it was going to be a tough ask.

He did however demonstrate incredible talent to back up his growing reputation but Conor's control pushed Jordan to his limits around the 14th minute mark. The finishing line was in sight and with outstanding accuracy and craft he closed the game out. 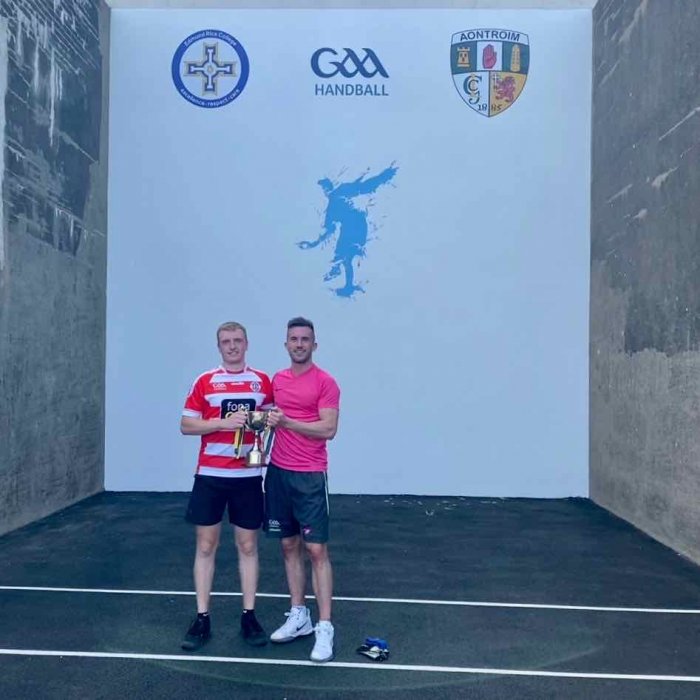 An incredible day, a super buzz around the school. It turned into an occasion to catch up with people that havent seen each other in nearly 2 years, that was the great outcome of the tournament and we recommend what ever County or Club is in a position to host, do so for a social occasion as much as the handball….

That said, players are players and when the clock is ticking, the game faces quickly lock in…that too was very important and great to watch.
Crowd members of seasoned handballers and inquisitive newbies alike were enthralled to watch the incredible standards on show.

Well done again to Conor on his return to play after 29 months post back surgery and rehab and thanks to all who took part and especially Edmund Rice for the use of the facilities, to the working team of Dan Mc Vicker & Seamus O Tuama for sorting things on the day and keeping social media updated and Eilish Owens who kindly did the photography, video and flew a drone all at the same time…

And finally a special thanks to the tournament sponsors Vickerstock who kindly came on board to support the event.

Within a day Darren Mc Vicker sourced & engraved a top quality Trophy that will record the annual winners for years to come.

We hope you enjoyed and see you next year!

A sign of successful tournament , we are running a kids camp in July and from the tournament on Sunday parents have signed all 20 spots up after watching the games.