The curtain came down on the 2019 4-Wall season in some style at the weekend with the top Juvenile players in the country producing an exhibition of Handball in venues in Tyrone, Monaghan and Armagh.

Action kicked off on Saturday morning with over 60 Boys & Girls in the 11 & Under grade displaying outstanding skill that belied their young years. They set the scene for what was to follow across the next 36 hours as the skill level was extremely high for such young players.

Saturday saw grades whittled down to the semi final stages with plates completed on Saturday evening meaning Sunday’s action took place in Loughmacrory, Carrickmore and Beragh with semi finals and finals the order of the day. On Sunday Beragh’s impressive new double court facility saw the major semi finals and finals take place there and a packed gallery were treated to some outstanding Handball throughout the day.

The 13 & under girls saw Wexford’s Jodie Keeling and Tipperary’s Hannah Grace progress to the final following tight semi final victories. Jodie Keeling needed a tie break to see off Tyrone’s Dearbhail Fox 15-13, 3-15, 11-6 while Hannah Grace defeated Galway’s Cliona Ni Chonghaile on a tight 15-14, 15-12 scoreline on Saturday evening. In Sunday’s Final it was Wexford’s keeling who came out on top taking the title on a 15-9, 15-9 scoreline.

The Boys 13 & Under saw the title head down the road to Monaghan as Sean Callan defeated Cavan’s Oliver McCrystall 15-7, 15-14 in a close final. In the semi finals Cavan’s McCrystall had a fine win over Kilkenny’s Niall Drennan 15-6, 15-4 while Callan accounted for Cavan’s Niall Magee in a three-game thriller eventually winning out 15-9, 6-15, 11-5. 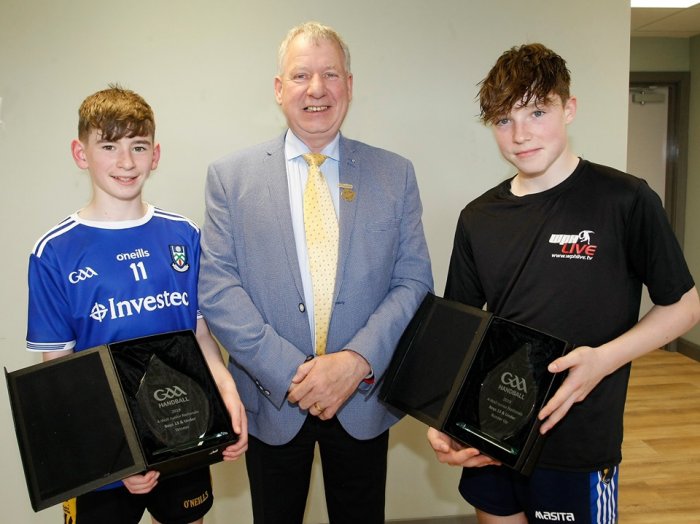 The 15 & Under grade saw impressive performances from Clare’s Chloe Philpott and Wexford’s mark Doyle to take home the titles. Philpott staged a fantastic comeback from losing the first game to number 1 seed Amy Brennan from Kilkenny to take the second game and went on to claim the third and her maiden Nationals title on a 8-15, 11-15, 11-2 scoreline. In the semi-finals Philpott who was in fantastic form all weekend caused a shock defeating number 2 seed Clodagh Munroe 15-9, 15-12 while Brennan was victorious against Galway’s Emma Kinane 15-7, 15-5. 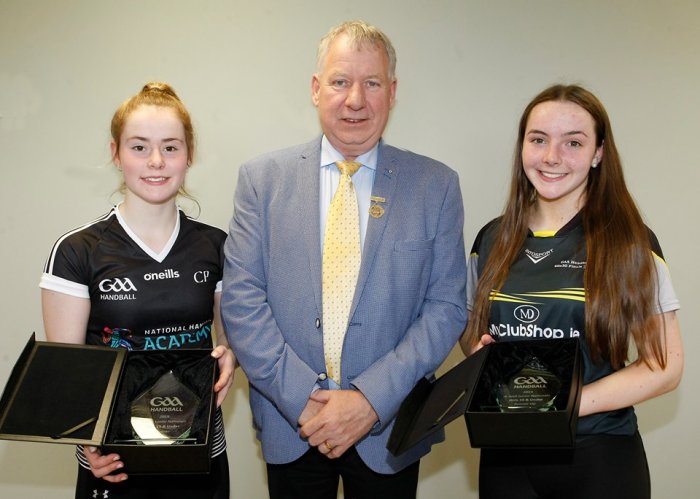 Wexford’s Mark Doyle was a man on form at the weekend, keeping all his opponents to single figures en route to winning his maiden Irish Junior 4-Wall Nationals 15&U title. In the semi final Doyle defeated Tyrones Jack Darcy 15-7, 15-5 while on the other side of the draw Galway’s Mikey Kelly defeated Kilkenny’s Kyle Jordan 15-12, 15-13. In the final Doyle was in imperious form and took the title on a 15-7, 15-4 scoreline. 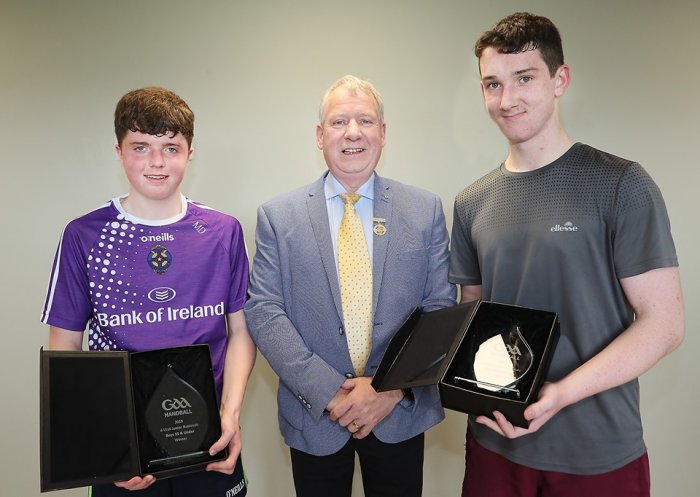 The 17&Under Girls grade saw Kildare’s Mollie Dagg and Galway’s Niamh Heffernan qualify for the final following semi final victories over Kilkenny’s Noelle Dowling and Tyrone’s Elizabeth McGarvey. The final was a high quality affair with Dagg edging the first 15-14. The second game was equally as tight early on with Dagg eventually pulling away to take the title on a 15-14, 15-11 scoreline. 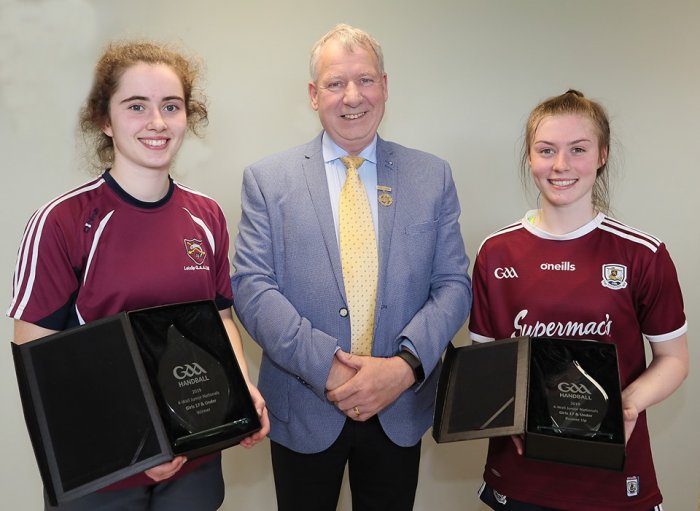 The Boys semi finals saw Monaghan’s Eoghan McGinnity defeat Galway’s Jason O Toole 15-5, 15-13 with the second game in particular a close run affair that saw McGinnity pushed to the pin of his collar to secure victory. Mayo’s Lorcan Conlon defeated Tyrone’s Cormac Munroe in a three game epic in the other semi final eventually sealing his place in the final on a 14-15, 15-10, 11-10 scoreline. The final saw McGinnity’s experience come to the fore as he had too much for the Mayo man winning on a 15-5, 15-0 scoreline to cap a fine 4-Wall season for the Monaghan Harps man. 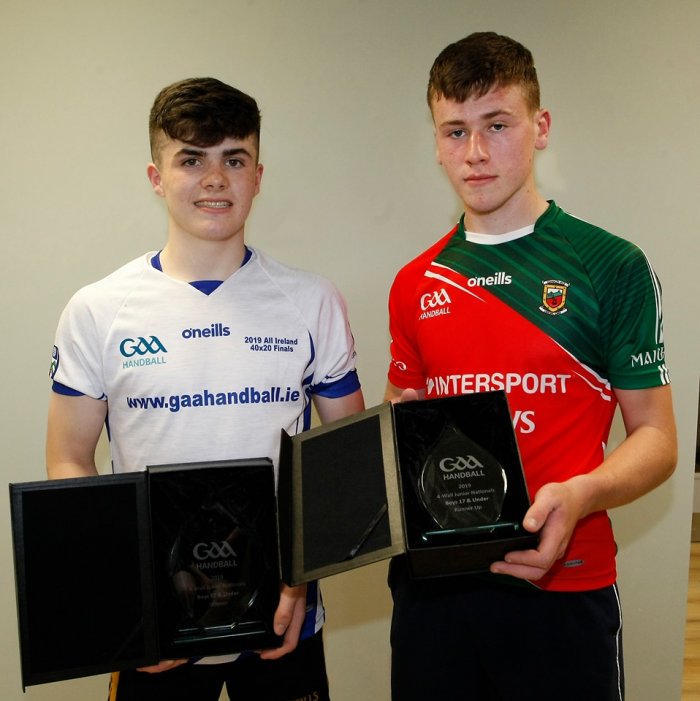 Meanwhile the 19&Under girls grade saw Megan McCann defeat Wexford’s Cora Doyle 15-7, 15-12 to set up a battle against Kildare’s Leah Doyle in the final with Doyle defeating local girl Michaela McCartan 15-2, 15-5 in the other semi final. The final was a rip roaring contest with Doyle taking the first 15-13 before McCann took the second 15-8 and went on to claim the title on an 11-7 scoreline in the tiebreak. 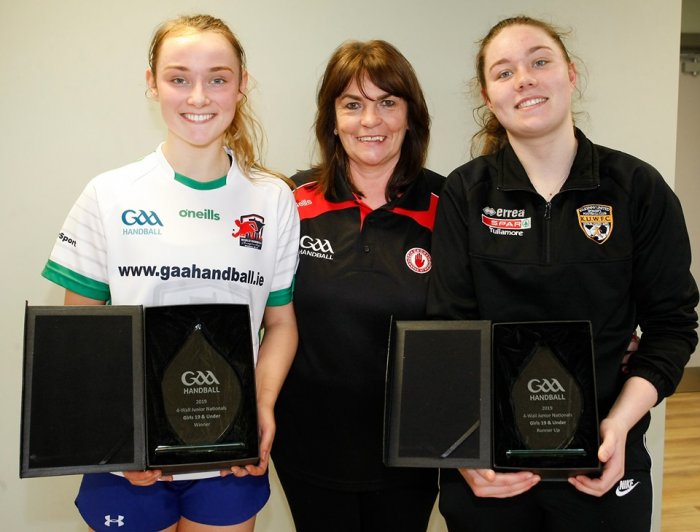 The Boys 19&Under final also needed a tiebreak to separate the pairing of Wexford’s Adam Walsh and Cork’s Conor Walsh with the Wexford man coming back from 9-4 down in the third to capture the title on a 15-13, 12-15, 11-9 scoreline. Walsh had earlier accounted for Cavan’s Diego Di Folco in the Semi Final while Cork’s Walsh had accounted for another Cavan man in Adam Crosbie.

So as the sun set in the Red Hand County the large contingent that had descended on the northern venues made their way back to the four corners of Ireland after an epic weekend of action with new friends and great memories made. 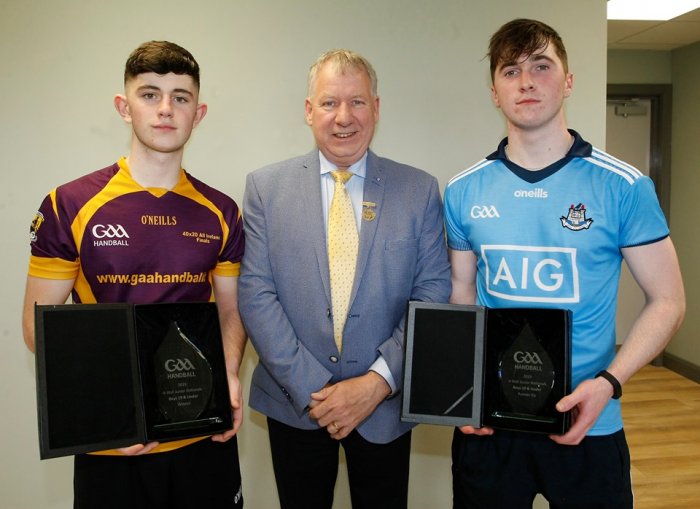 GAA Handball would like to thank the ten venues of Breacach, Carrickmore, Loughmacrory, Pomeroy, Killyclogher, Greencastle, Eugene Quinn’s, Monaghan Harps, Tydavnet and St Mellans for having their facilities in such fine order and for the welcome they afforded to each and every player, spectator and visitor over the weekend. The facilities on offer were hugely impressive and the hospitality in the venues was second to none and showcased the great work been done by volunteers throughout the country. Great credit and thanks also to the organising committee led by Tyrone’s Paula Clarke for running such a fantastic tournament. To all the referees, venue officials we say a huge thank you for their time and commitment. To the parents and coaches for committing to entering and bringing the players to the tournament thank you for your support and finally to the players who made the weekend so fantastic with their displays of skill, athleticism, sportsmanship and commitment we say congratulations and well done to each and every one of you.