A few weeks back we ran an article highlighting Handball being played in the Czech Republic, much to many people’s surprise.

It may also come as a surprise to learn that there is a small fraction of Handball currently being actively played in Saudi Arabia. Dr Ronan Carolan, a native of Meath, is the man driving this development having emigrated to Saudi Arabia for work many years ago.

Ronan played Gaelic Football for Kilmainhamwood GFC as a youth, and began his Handball at Cormeen HC in Meath. Now he finds himself Handball several times a week at the two Racquetball Courts in the KAUST University, Saudi Arabia, where he works as a Mechanical Design Engineer.

“I have raised a few eyebrows with the handball matches we are playing here. I have trained a few people how to play the game and there is one Irish man here (55 years old) that played when he was in school, that also play with me sometimes.”

It is not just fellow Irish men Ronan is getting games with however, he has also taught the game to a Colombian PhD student over the Covid-19 crisis. The pair played Football together and since the restrictions placed on gatherings, the duo turned their attentions to Handball to keep fit and now play every other night.

“Even this week I have another player from my football team who came to watch us play last night. He is from the Basque region of Spain and knows of a very similar game played there. He is keen to play once his new gloves and goggles arrive.”

“I have also trained an Indian lad how to play but he has now left the University. He was a cricket player (bowler) and his hand-eye coordination was excellent so he also got very good very quickly.”

“The plan now is to set up a Handball club here at the University. There are about 8000 people here in this University community, with 1500 students.”

“There are many Irish here but none of them have been exposed to the Handball courts yet, and we need to get some equipment sent over. I guess in the long run I hope we can expand the GAA Handball club to the 2 other GAA codes, but first things first.” 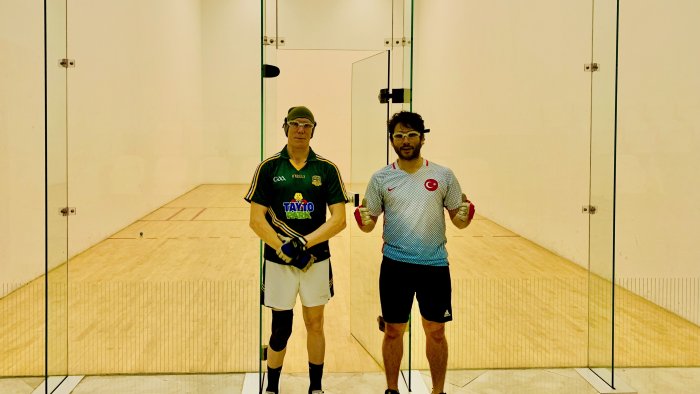