This weekend sees the return of competitive Handball at a national level with the start of the 2020 MyClubShop.ie Senior Softball Championship.

Five Preliminary Round matches in the Men's Singles kicks off proceedings, with the Ladies Championship beginning next weekend.

Last years Intermediate Champion Shane Dunne is one of the players taking to the courts on Saturday as he faces off against Wicklow's Chris Doyle. Dunne is delighted with the opportunity to compete in the big court this year given the uncertain nature of the sporting environment due to the Covid-19 pandemic.

"I was not expecting to play any handball this year due to Covid-19. It has being tough not being able to play the big alley during lockdown, but it’s important to take the positives out of everything. I took a break from handball and went back playing hurling. I feel a lot more motivated this year to play handball at compete with the best."

The lockdown Ireland has been under for the last six months has meant Handballers approach this years Championship with very different preparation than normal. Lack of competitive action and restricted access to facilities has been difficult, but on a positive note, Shane luckily has had a handy training partner in the same household via younger brother Kyle, last years All-Ireland Minor Champion.

"Training has being different. As the handball alleys were closed, I had to focus a lot on running, and home workouts. It was also tough to find motivation, as we didn’t know if there would be any handball or sport at all this year. But it’s better being prepared than not at all! Once the alleys have opened, myself and Kyle have being training hard. He comes in handy for a match!" 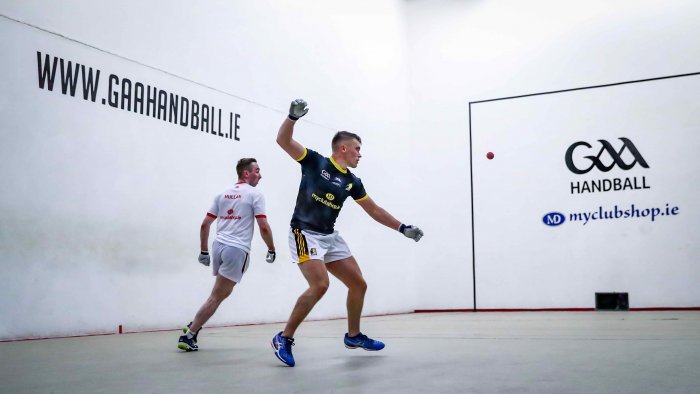 Dunne has met Chris Doyle twice previously, with the scores balanced nicely at one apiece, so whilst starting as favourite, he is certainly not expecting anything other than a tough battle on Saturday.

"I have played Chris Doyle twice in the big alley. I played him first in a team event in Clogh a few years ago. He gave me a good trimming that day, with two good hands, and the ability to kill the ball, and hit shots you least expect. I then played him in the intermediate Leinster final last year, which I had a good win and got him back for the first loss. He will definitely be up for it on Saturday, and be a great game."

A noticeable omission from this years Championship is reigning Champion Eoin Kennedy who has struggled with a hip injury ever since his remarkable underdog win last September. Amazingly this will be the first time Eoin will not compete in the Senior Softball Final since 2003. It doesn't exactly leave the door open for glory as Robbie McCarthy will again enter as red hot favourite to win his 8th title, and 12th consecutive Final appearance.

But it does open an opportunity for a new finalist at minimum and Dunne is expecting a few dark horses to make their mark in this years Championship.

"There is always dark horses in any sport, and it’s not always the favourite who will win it. Especially this year, a lot of players are putting the work in behind the scenes, so I think there will be some shocks in this year championship. I think Martin Mulkerrins could be a dark horse after having a great win in the Softball Nationals last year. But time will tell."