Wexford's Marguerite Gore is a woman immersed in Handball; as a player, coach, administrator and referee! She is this week's Women in Handball feature profile and we take a particular focus on her refereeing experience, an area of Handball that does not traditionally have a big uptake with females.

Tell us a bit about yourself?

Marguerite Gore from Wexford Town, nearly 19 fun and wonderful years with Philip and he has been blessed to be married to me for 11 of them years. We have two children, hyper sports mad Padraic, 8 years old and fashion-designer fairy beautician Ali who will be 6 next month. I am a Professional Classically Trained Culinary Chef and have worked in Whitford House Hotel (a gem of a super and supportive family run Hotel) for close to 20 years now with the exception of parental leave and when we lived and worked in Bermuda and the beautiful Caribbean Island of Nevis.

Handball is my main hobby and passion, I used to play women’s indoor soccer until last May when I picked up a serious knee injury which has been slow and painful to recover from but I’m hopeful to return to a handball court before the end of this year. I do now find myself becoming involved in my children’s hobbies and interest’s and have taken up a coaching role in their respective underage hurling and camogie age groups. In January I had started a fun and fitness class in their primary school and hope to continue that when school returns later in the year hopefully, we’ll be after kicking Covid-19 in the butt by then.

I grew up on Trinity Street, Wexford Town, only a good handball throw away from my local club St. Mary’s HBC in Emmet Place, and as children we always played up by and around the grassy area at the back of the alley. I was around 11 or 12 when I first started showing an interest in playing handball. This brought much delight and encouragement from my late dad (Paddy Byrne) whom himself played (never competitively) during his younger days with his friends and now legends themselves Paddy Lacey and Seamus Buggy to name just a few.

As a juvenile I was lucky to have great support from my club and family, particularly my parent’s (my dad was my main coach) and fantastic mentors in Mick Flood and Myles Byrne in a time when female participants were low in the game. I was uniquely privileged as a juvenile to stand on the back wall of the Mary’s during big alley season and watch the likes of Ducksy Walsh, Tommy Hynes, Brain Gilhooly, Barry Goff, Eugene Dowling and many more highly talented handballers train on a daily basis. The players and handballing skills on display was extremely rare and priceless and I was so lucky to be able to watch such games in my home court as a juvenile and they still remain to this day some of the best handball games I’ve ever witnessed.

What roles have you undertaken over the years?

I was trying to remember all the different roles I have undertaken over the years. It seems to be a common pattern in handball that when you take on one role you somehow end up doing multiple roles over the years. At club level I would have done secretary, children/juvenile officer and coaching. At county level I would have done children/juvenile officer, youth games officer, juvenile secretary and various coaching roles with county juvenile teams and also some PRO stuff. I am also a National Coaching Tutor for GAA Handball.

You are one of only 2 female National Coaching Tutors for GAA Handball. What do you enjoy most about coaching?

I am extremely grateful and thankful to GAA Handball for giving me the opportunity to become a National Coaching Tutor in this sport that I love and their support, guidance and help along my journey has been outstanding and encouraging.

I would find it hard to name a couple of things I enjoy most about coaching, as I believe there is so many different aspects, roles and elements to coaching I couldn’t define it as a couple of things. It’s the versatility, interactions, fun, learning and development which come to the forefront for me. I’m in a lucky position with my coaching roles that I get to work with both juveniles on the court and with adult’s in a development and learning environment, however which ever group you are with for a session you are guaranteed to have fun and laughs and forget about the outside world for a while. I love to help, watch and mentor people to learn, develop and grow in their ability and confidence, whether it’s on the handball court, pitch or the heat of a kitchen.

It's also rewarding to see a juvenile working and training to successfully reach their targets and see adults grow and believe in their coaching abilities. I believe you should never walk away from a coaching session without learning something new however big or small, somebody will always have something new to share or teach us. Listen to everyone.

Do you believe there are any barriers to more females getting involved in coaching?

I personally don’t feel there are any barriers if anything there is now more opportunities, help and support available for females to get involved in coaching. I can understand someone’s reluctance to take on a coaching role especially if they never played the game but its well known throughout all sports the best coaches weren’t always the best players.

I would encourage any female that feels they would like to get involved with coaching to attend a GAA Handballs foundation level coaching course. I would also advise them to watch, listen and learn from other coaches at club or county level and don’t be afraid to ask question’s however big or small, the answer should help you understand and learn. Identify your ability and comfort zone in your coaching be it at whichever age group or just with their own children at the start and learn, grow and develop from there.

There is great support and advice available from GAA Handball Development and an abundance of coaching resources available both on-line and personally I would be delighted to help anyone start or develop anyone along their coaching pathway.

Is there anything you would like to see more of to encourage increased female involvement in coaching?

Wouldn’t it be fantastic in a few years from now that we would see all the girls Feile teams been coached by female coaches from their club?

I know this is a little away for the initial question, however I do firmly and strongly believe to fully increase and sustain female participation in handball in general, there are three areas, in my opinion that are not utilised to their full potential, these areas are primary schools, player retention (at all ages) and ladies facilities within clubs. In my opinion these areas are desperately in need of more attention, resources and funding.

Refereeing is another aspect of Handball that we rarely see females undertaking. You have refereed a few All-Ireland Senior Finals recently. Tell us about your experience of these.

The first All-Ireland Final I was asked to do was the 2018 Ladies Softball final in Croke Park featuring Catriona Casey v Martina McMahon. I remember I was still on a high from my success at the Worlds and I received a call from Austin McKenna asking my availability to referee the final, wow what an honour and privilege of course yes. On the day I would be lying if I didn’t say I was nervous because the realisation of the venue, the crowd and the hundreds watching on live stream and most of all this was an All-Ireland Senior Final between two of the finest handballers (men included) the world has ever seen with the fiercest female rivalry from any sport.

For me refereeing is somewhat like playing, you have to have complete focus, head in the game attitude and nerves are good it shows you care but they fade as the game begins. To sit up at the top of Croke Park in the home of handball that day (for 2 and half hours or so) refereeing a game that will be remembered as one of the best Softball Finals ever played is without doubt up there as one of the proudest moments in my handballing life.

The other final that sticks in my head is the 2019 All-Ireland Senior Ladies 4-Wall Final in Cavan, this game was a carbon copy of the Softball final, same players, same rivalry, same fast high paced game played with extraordinary skill, execution and battling from both players, same length of time but with the added heat of Kingscourt heating up tensions. Both these finals will be talked about for years to come and to be able to say I was the referee on both occasions is truly an honour, however I can safely say that between the pair of them Catriona and Martina they have aged me over the course of these two monumental and history making games and I headed straight to the hotel bar after these two finals for drinks (a lot of drinks).. 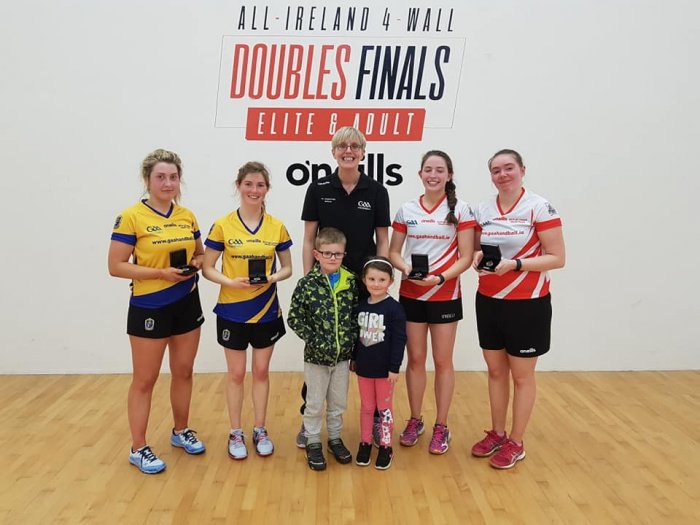 I have refereed other All-Ireland Finals (Minor & Doubles) for me each and every one of them brings pride and honour to be involved. I feel I am a fair referee and love to let the game flow, let the player take their shot before calling cover balls (with exception of course).

My only regret was not been available due to other commitments to referee the last Ladies All-Ireland Singles Final played in the old Croke Park alley before the move to the new state of the art handball arena.

My advice to any of my fellow females wanting to get involved with refereeing, go for it why not? Believe in yourself, when you make a call stick with it and enjoy the game and the role and take pride in yourself for having the belief and confidence to stand up to do the game. When refereeing juveniles use your compassion, understanding and patience because this could be the biggest moment for them not just in handballing terms but in life show them respect and smile, it gives them reassurance. It is really enjoyable trust me.

Do you foresee more females taking up refereeing roles?

I truly hope we will see more women taking up refereeing roles in handball. As with coaching at present the opportunities to get involved were never greater. The Referee Pathway which was launched last year by GAA Handball offers everyone the chance to get involved and become a referee. The rule book is available for all codes of handball on the GAA Handball website for anyone to download and read. Start at club level with underage players and progress from there. As with coaching learn from watching other referees even ask the referee if you can stand with them during a game this gives you an opportunity to ask questions (during a break in play of course) on certain calls you might not be sure of or why they made their decision. As a referee and a coach, you are going to make mistakes, wrong calls and decisions we are human, none of us are perfect.

One day I would love to see all women’s games being refereed by women definitely all the Juvenile and Ladies All-Ireland Finals and would love to see this taking place especially at the She’s Ace in all grades and events.